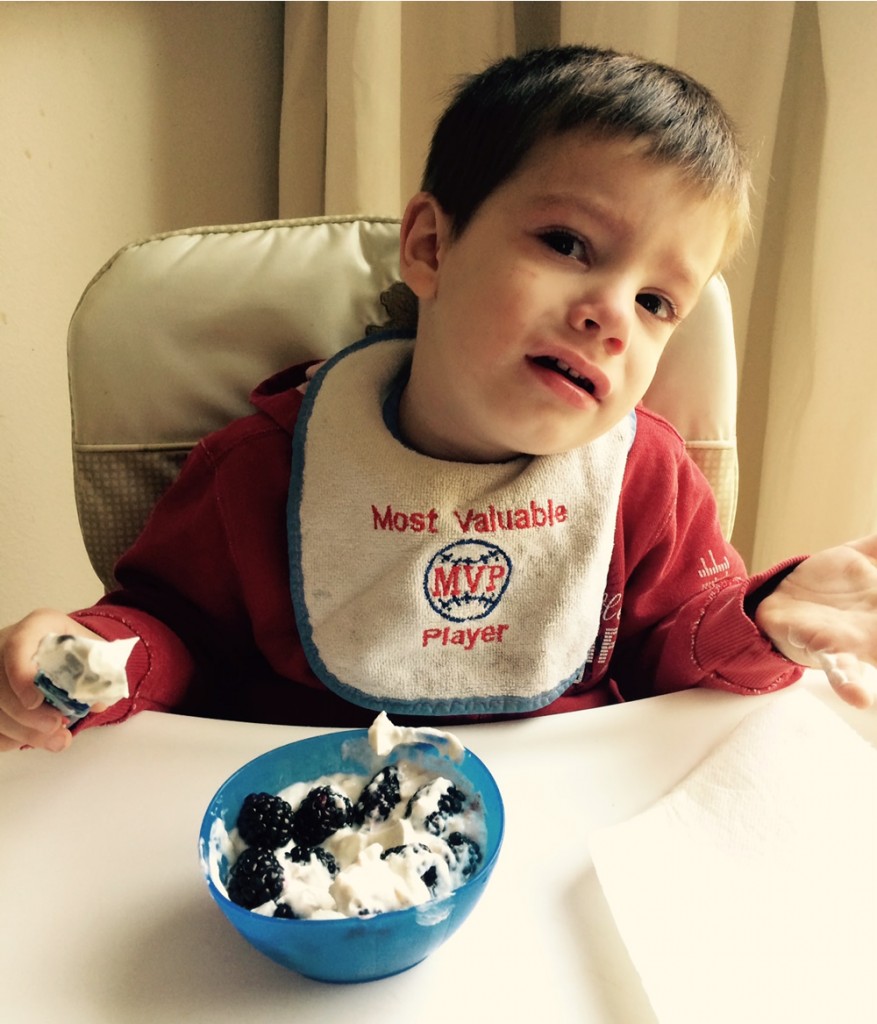 Ray has been my happiest baby by far … I use the past tense because it is a thing of the past. What happened to my sweet, happy Ray?

He used to be my pal. My little side kick. We’d eat breakfast together, talking about the berries in his yogurt and giggle about how they looked with yogurt on them. Not anymore. Now he cries because the yogurt is touching the berries. Or because the spoon is already in the yogurt, so he whips the spoon out, flinging yogurt everywhere (including all over himself) then cries because he now has yogurt on himself. He’s no fun anymore.

We used to meander outside, look at the lemon trees, water them and talk to one another about the flowers and then sniff them. Not anymore. Now he has serious opinions about wearing a sweatshirt or not and cries about it. He doesn’t like the shoes I put on him, or the socks, or the fact that I opened the door instead of him. He wants me to let HIM water the plants, but refuses to let me help him hold it, so then we both get wet when he jerks away and well … he’s no fun.

He cries all. the. time. About everything. He whines and cries and yells and his language has taken a turn for the worse. He used to try and copy what I would say. I’d get close to his face and help him repeat it. We’d touch each other’s lips and I’d stick out my tongue and so would he. We smiled. Not anymore. Now he just grunts and whines. I have to guess at everything he says.

There are no winners here. He cries and is sad all the time and I feel like crying after spending 10-15 minutes with him at a time. The days are full of time outs in his room, lots of grunting, crying and questions. We are at an impasse. Everyday. All day. Nothing gets done and no one is happy.

The worst part is that I feel absolutely no empathy for him. at. all. He stares at me with his face covered in greek yogurt and honey, crying about something stupid like the placement of his spoon and I think, “Man! Do you have any idea how good you have it kid?!” So I put him in his room and let him cry it out until he’s more ready to deal with the world around him. Aaaaaand, he’s actually there right now – in his room. But lucky for me, I live in a two story house, so his crying is like the faint, distant crying of maybe someone else’s kid. I can imagine that it has nothing to do with me and I don’t have to worry about it for a few more minutes. Then it’s back to being a mom of a 2 and a 1/2 year old. ugh.