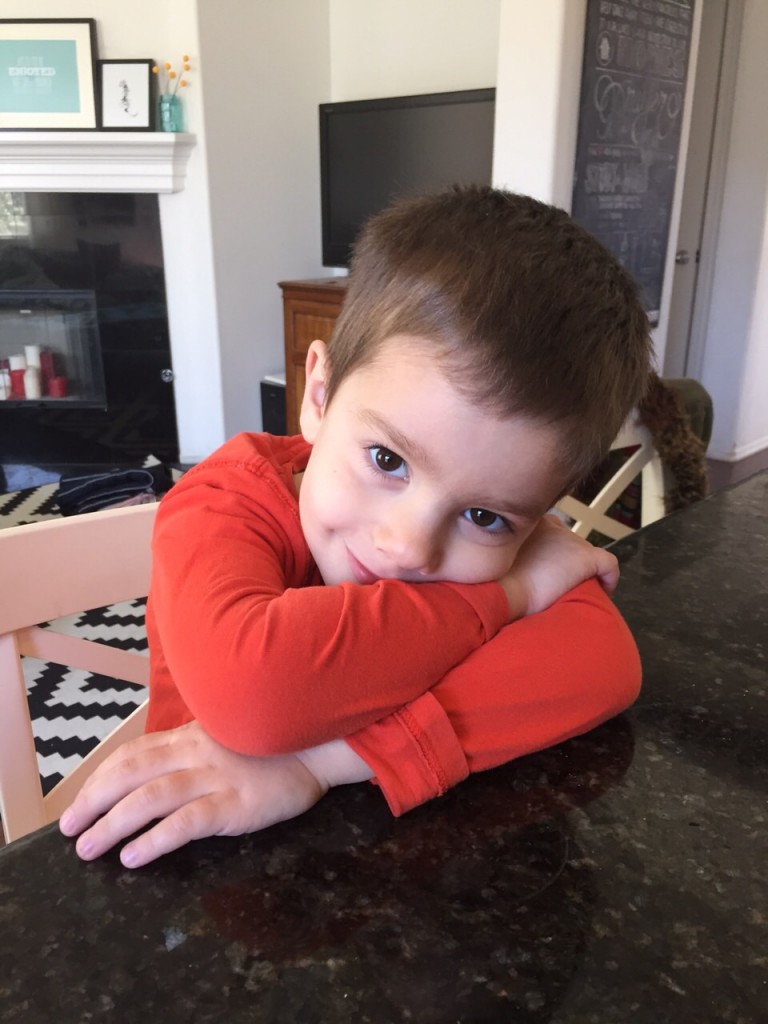 I feel like I documented Noah and Liam’s younger life better than I have done with Ray. So here’s my effort to keep up. Ray is 3 and a half and adorable these days. And he loves me the best.

He says hilarious stuff. Lately these are my faves:

He consistently refers to Daniel and I not as daddy and mommy but as “Dad” and “Mom”. It sounds so grown up for a 3 year old. Even as a 2 year old he did that. We’ll even say things like, “Tell Daddy – ‘Daddy I’m sorry'” and he’ll repeat it as “Dad, I’m sorry”. So funny. He also consistently refers to his poop as “stinkies” not poopies or anything else we call it. He seems like he has his own opinion about stuff.

He’s ridiculously happy. The only time he gets in a bad mood is if he hasn’t had enough food or if he doesn’t get enough alone time at home. He seems to kind of love his time with me while the older boys are at school. He gets to rule the house and the legos and nobody tells him what he can or can’t do and for a youngest child, who gets told he’s too little quite a bit, it’s good for him to have time when he’s in charge of his own little life.

Ray is VERY loving. He spontaneously gives “huggies” and kisses throughout the day. He will tell me he loves me all the time too. He’s a love. I can usually talk him out of a fit and I can generally take him with me anywhere I go. He’s a pretty good natured kid. I’ve taken him to class parties in Noah’s fourth grade class several times because I’m the Room Mom and have to go. He stays close to me and is pretty low key in public.

His best friend is Emily Clark, his cousin. Today in Primary they were sitting side by side in the front row and I was teaching singing time and they just kept talking to one another and then finally started kissing each other and giggling. He calls her “Emlee”. Emily is pretty bossy but Ray is pretty easy going so they work well together. They both like pretending together and we call them, collectively, “the babies”. They are both the youngest of our families and we might refer to them as that for the rest of their mortal lives. They’ll probably hate it. But they play so well together, that sometimes I will call Christina and ask her to bring over Emily so I can get some stuff done. Emily and Ray will play for hours, happily. I love it. If Emily or a playmate is not here for Ray to play with, he will follow me everywhere and ask me to play with him. He doesn’t like to be alone. I constantly trip over him because he is usually at my feet or right behind me or within 24 inches of me at all times. I see it in photographs. It’s kind of funny, kind of cute and kind of frustrating at the same time.

I have a hard time playing “guys” with Ray, so I generally don’t do it. We do other things together, but Daniel plays “guys” with him. It’s usually Lego guys. Daniel says Ray is a pretty demanding player though. He has specific things he wants you to say and do and pretend with him as you play with him. He doesn’t seem to do that with friends, just adults. I think he feels the need to guide us because we don’t seem to know how to pretend very well.

He’s a beautiful little soul and I love him.

One thought on “Rayman”