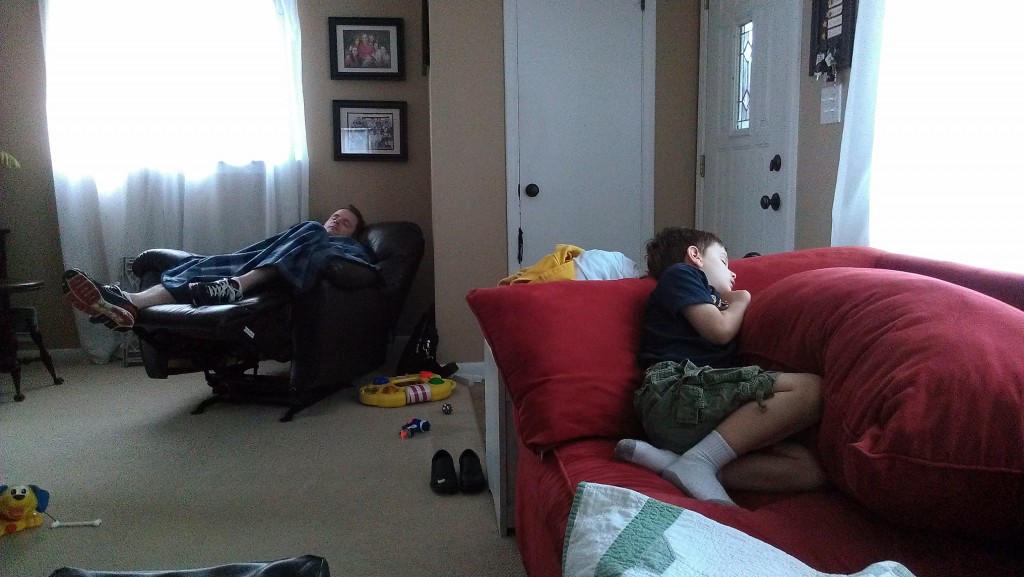 Today is Memorial Day and we are in full napping mode around here …. except for Noah and me of course. This is the way we roll in our Forsyth clan. Daniel and Liam snatch as many naps as they can and Noah and I stay as productive as possible every waking moment. We went to the ward Memorial Day picnic this afternoon and it was pretty fun, despite the uncooperative weather. Truthfully, I am really tired of this May-bi-polar weather. It’ll be in the 40’s and 50’s one day, windy and cloudy and cold, then humid and hot in the 80’s. This week is a case in point. Today it was cold, rainy and in the 50’s all day with chilly wind. Not fun to play baseball in and eat food and chat, but we did it anyway gosh darn it! And tomorrow it’s supposed to be in the 80’s and thunderstorming (which means 100% humidity). How about a happy medium, eh?

Anyway, I realized that with all of the pictures of the Liam party, I never mentioned what’s going on with my new five year old these days. Here’s the run down on my sweet little Liam:

– he is moving out of the sad, mean 2 year old phase that lasted for 3 years and into the more agreeable and fun Liam we are coming to know and love

-he is still our biggest and most fun snuggler. Just this morning, Daniel and I were snuggling up on the couch and Liam walked through the front room, spotted us and jumped up on the couch, then wiggled his way right in between us and smiled. What a love.

– he still gives me kisses and hugs before he goes into his preschool class.

– he looooves his Gammie. Liz came to visit this past week and Liam was like putty in her hands.

– to my utter amazement, he knows all of his letters. About halfway through his preschool year I was spending lots of time trying to sit with him and help him write his letters and he hated that and did not respond well (let’s leave it at that). I even talked to his preschool teacher about it, how I would ask him as we were driving around, “hey, what letter is that?” and he would respond, “I don’t want to talk about it”. His teacher said I should try and sneak letter learning into our daily lives, like maybe I should get him some bath crayons and have him write all the letters he knows. ha! Perfect! Mrs. Yessler is a genius, right? So I did just that. Then discovered that our tub is so old, that the porcelain is wearing off and when Liam wrote his letters on the bathtub … it stayed. Sooooo, I spent some time scrubbing the tub and got rid of the crayons. Bottom line, I was worried about Liam learning his letters. But lo and behold, at kindergarten round up a few weeks ago, they tested him on his letters and he knew every single one. I couldn’t believe it. Is that sad? I saw all of his letters circled on the sheet and asked another mom, “are the circled letters the ones he knows or doesn’t know? I either have a really smart kid, or a totally dumb kid”. It’s sad that I didn’t know which one. Anyway, I tested him in the car and yep – he knows them all.

– now that he knows his letters, he’s always spelling things he sees out for me and saying, “what does that say?”

– he loves carbs … and sugar. He will sometimes just ask to eat a piece of bread because I’m feeding bits of bread to Ray, and Liam loves bread. And sugar. I am raising a kid in love with donuts and bread and sugar cereal and candy …. ahhhhh man. The only veggies he really likes and asks for are “carrots and sauce” (ranch dressing). At least its something.

– he’s still very internal. Sometimes he will burst into tears and we don’t know why and he won’t tell us why and we have to wait until the next day or later that day to ask him and hear what the problem was. I blame Daniel for this. I am  huge communicator. Liam, not so much. But you feel so privileged to be a part of his circle of people he trusts when he does speak to you. Sometimes he’ll offer up information about what happened at preschool or at his friend Lucas’ house and I always find myself freezing in place to listen and pay attention. It is rare and special for him to share and I love it when he does. It makes me feel special.

– he does not like to draw or paint really.

– he can be super silly. He has a very animated face sometimes. I have randomly caught it on film and it always cracks me up. His face is so beautiful – round and full lipped with the darkest brown eyes I’ve seen and soft, olive skin. Then to see those full lips squish up to show confusion …. awww, I love it.

I would write more, but it’s way past dinner time and life is moving on and it’s getting late. I love Liam and 5 looks good on him