I started my period. TMI? Whatevs. My house is a bit of a disaster, I already showered, took kids to school, ran errands, hung out with Zacky and then Christina and put Ray down for a nap, so I feel like I can be done for the day and not feel bad about it. It’s noon.

I am on the committee that puts on the Relief Society activities/meetings. Last night we had an event and it was awesome. We had Patriarch Bascom come speak to us about the Book of Mormon. It was mind blowing. He talked about the editions of the Book of Mormon and why they came out and how the closer we get to the original words spoken from Joseph’s mouth, the better the text is; it is more clear and makes more and more sense with what scholars continue to discover about ancient times and texts. It was so exciting. Patriarch Bascom reminded me of my dad and Bro. Collette. He was so excited about the Book of Mormon and all of his studies about it. He was moved by words and passages. He found wonder and amazement at what it must have been like to be Joseph Smith, speaking out loud the words from 3 Nephi 11 for the first time in this dispensation –

5 And again the third time they did hear the voice, and did open their ears to hear it; and their eyes were towards the sound thereof; and they did look steadfastly towards heaven, from whence the sound came.

6 And behold, the third time they did understand the voice which they heard; and it said unto them:

7 Behold my Beloved Son, bin whom I am well pleased, in whom I have glorified my name—hear ye him.

8 And it came to pass, as they understood they cast their eyes up again towards heaven; and behold, they saw a Man descending out of heaven; and he was clothed in a white robe; and he came down and stood in the midst of them; and the eyes of the whole multitude were turned upon him, and they durst not open their mouths, even one to another, and wist not what it meant, for they thought it was an angel that had appeared unto them.

9 And it came to pass that he stretched forth his hand and spake unto the people, saying:

10 Behold, I am Jesus Christ, whom the prophets testified shall come into the world.

It was so powerful and such a testimony builder to listen to the Patriarch speak. He was animated too, just like Daddy. And he didn’t need to look at anything, no notes, no hiding behind a pulpit, he was so comfortable just discussing with us his findings. I loved every moment. I felt like clapping afterwards, but I guess that’s irreverent. I went up to him afterwards and chatted with him for a bit. He studied religion in college, majored in it and then taught high school history and later a high school religion course too. Such a fascinating person and an enlightening night. I love having time to educate and uplift myself all at once. Loved it, loved it.

Anyway, as a sidenote – we put together a “bread bar” to celebrate and mirror the sustenance we were given through Patriarch Bascom’s presentation. Give us our Daily Bread … through an awesome little bread bar. We had pita and naan bread with several different, yummy hummus dips. There was honey wheat, pumpkin, cinnamon raisin and jalepeno cheesy bread. All complete with butter, honey butter, jelly and olive oil and balsamic vinegar to dip everything in. We decorated the table with lavender, green potted plants and one basil plant. 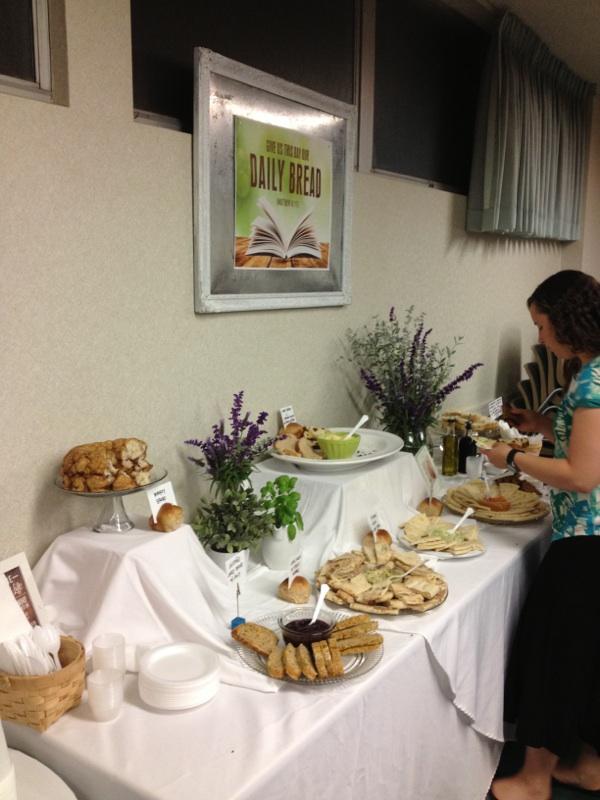 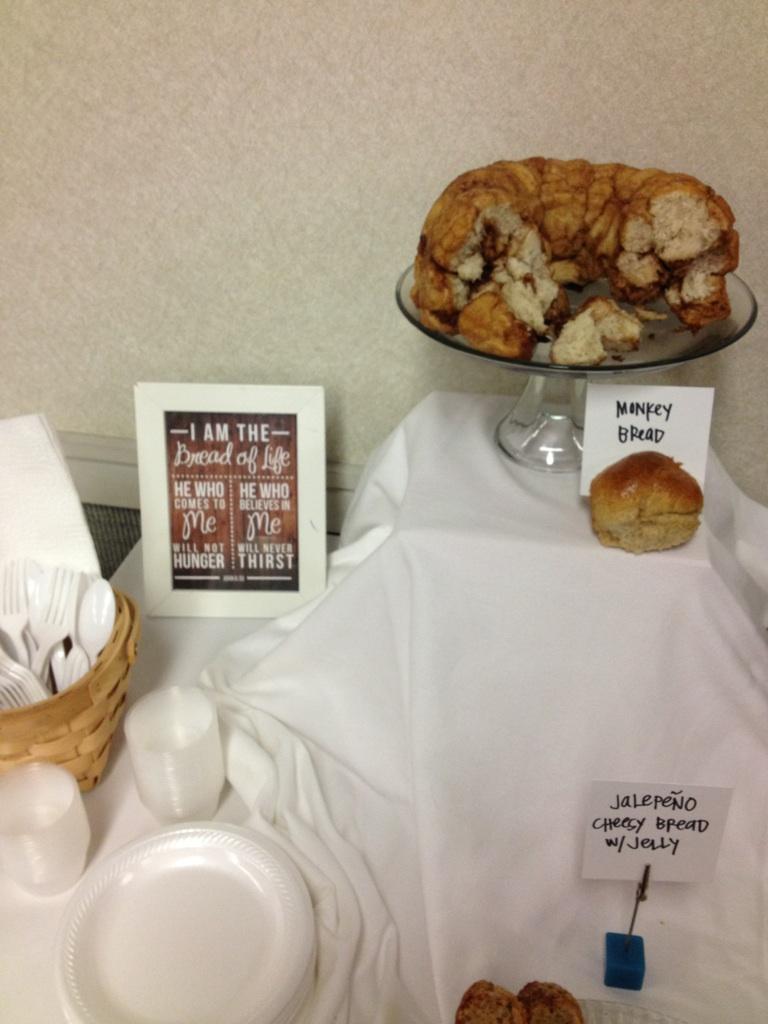 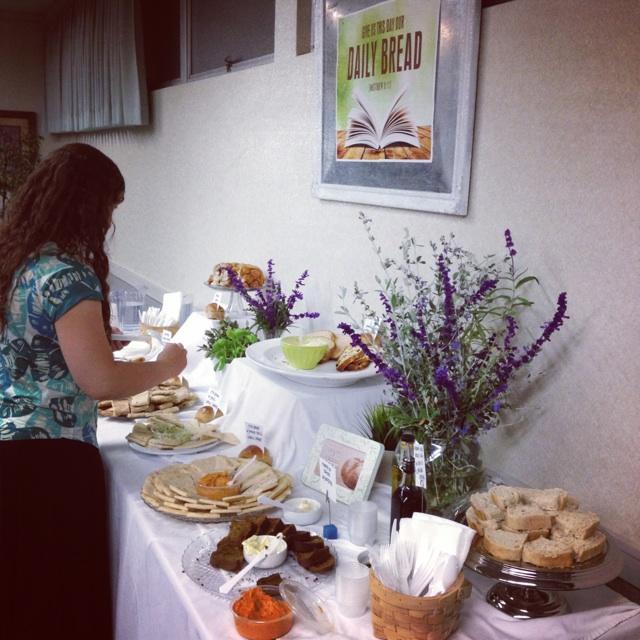 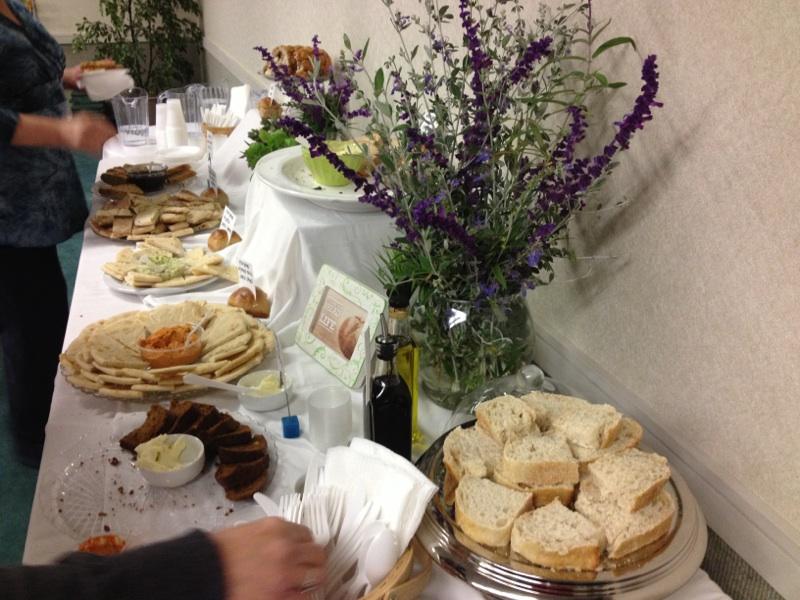 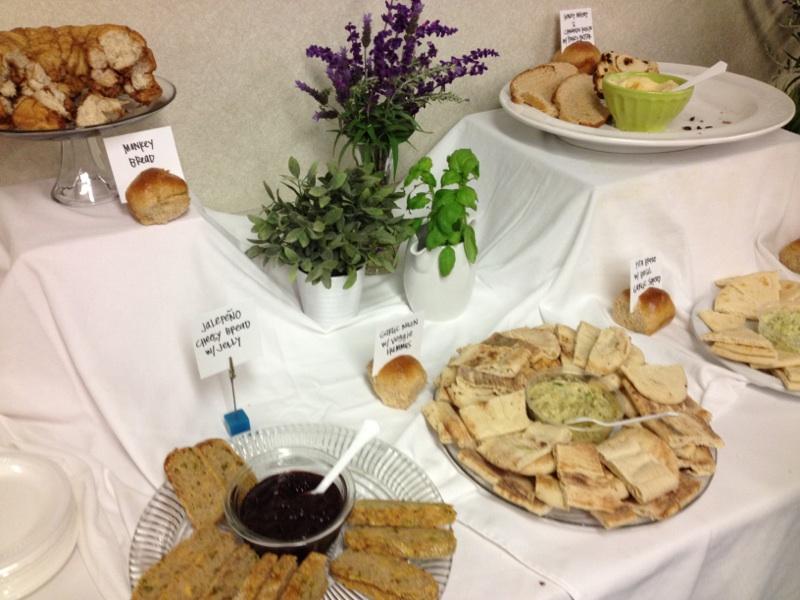 Besides this, life is moving forward here in California. Today is a cloudy day, which is why I’m taking some time and spending it indoors to type away, but pretty much every day is a sunny day. It’s unbelievable. I was bummed out last Saturday because early in the week it said it would be 77 degrees at the beach, but it cooled to 71 and we decided against a beach day with such chilly weather …. I know. I smile even as I write this because most of the country is covered in snow, in February, and here I am bummed about 71. I’m not bummed. It’s gorgeous.

I realized that I never really documented Ray’s first word. I’m pretty sure it was DADA, because he loooooves Daddy. But Ray went from grunting to saying like 4 words all at once, so It’s hard to say. But here’s a list of what little Ray is communicating these days:

He’s a pretty cute little human at 20 months. He still walks like a drunk and I’m worried about that … when is he going to master walking? His run is hilarious. He ends up going faster but in reality, he just makes his steps tinier and quicker. You just have to see it. It cracks me up every time. And he is a true Daddy’s Boy. This is a first in our family. We have a lot of family photos around the house and so all day long I hear Ray rounding a corner or coming down the stairs yelling and then I see him point at a picture and yell, “Da-dee!!” Sometimes he hears the front door open and he takes a swift intake of air and says, “Huh! Daddy?!” His little heart is broken ten times a day. I need to start taking pictures of Daniel down from the walls … nd maybe we need to start entering and exiting from the back or side door??

Recently, Liam and I have been working on a project for his kindergarten class. It’s an alphabet book that he is making entirely on his own. His teacher sent home very specific instructions on how parents couldn’t “help”. This has been pretty painful for me. A project that I have to watch being done not perfectly?? … and although this started as a “pulling-teeth” exercise, it has become wonderful. Liam talks about it all the time and what needs to get done before it’s time to turn it in. He’s really become conscious of responsibility a little. And I’ve learned how to work with Liam better – giving him ideas, but letting him come up with it on his own. You should see his “proud of me” face. It’s gorgeous. He half smiles and sticks his tongue in his cheek and his eyes are alive with excitement and pride. I love it. I need to catch it on film sometime.

Noah. And there’s my Noah. He’s such a good boy, but lately he’s been talking back. He knows he’s pretty smart. Too smart. So he’s beginning to think that he knows more than everyone. Parents, teachers … everyone. This was a conversation we had on the way home from school the other day:

Noah: Is it bad for boys to take off their shirts and show their top part?
me: not when you’re swimming. But if you’re at school or anywhere else, it’s inappropriate to take off your shirt. I mean, you don’t see mommy walking around in her bathing suit, do you? And you don’t see Daddy walking around without his shirt on, right?
Noah: no. Ya know, even when you’re swimming, there are swim shirts.
me: yeah, in fact, we just got a shirt like that from Aunt Aria for little Ray. I’m excited to use it next time we go to the beach.
Noah: he has a swim shirt?
me: yes
Noah: no, I mean one that you use in the water. It’s made out of different stuff than regular shirts.
me: yes, I know. Ray has one.
Noah: But is it a swimming shirt? One that he can be in the water with?
me: yes. I know what you’re talking about and I’m telling you that Ray has one.
Noah: no, no. It is made from swimming material, like swim trunks.
me: Noah, I know what you’re talking about and yes.
Noah: …(silent for a second) … mommy, can I see it when we get home?

It’s like he felt the need to check up on me. sheesh. This kid. I even got a call home from his school teacher about him “talking back”. So we’ve had several talks about it. I really think he doesn’t know it when he’s doing it. So I’m trying to make him aware.

But … here’s a thought – what if he really is a genius and it’s terribly frustrating for him to talk to everyone around him?

Last night, Daniel and I went in to check on the boys before we went to bed and we found paper next to Noah’s bed with equations all over it. He was doing addition and division last night. But addition into the thousands – like 13,777 + 13,777 = I don’t even know, I’d have to add it … Anyway, he’s a beautiful creature, just like the other two. I’m a lucky mom.

As for me, I know it would make me so happy to clean everything up and I should. I should get up off this darn couch and clean. Yeah … but I’m feeling tired and it’s overcast and I ran 3.22 miles yesterday and I just want to maybe take a power nap before the boys come home from school ….. pretty sure cleaning up is not winning this one.

One thought on “today”