Every year I try to come up with a new idea of how to distract my kids while we watch 8 hours over 2 days of conference. This year I got inspired the day before. My little sister, Christina, told me about this girl who made an entire “conference center” on a tri-fold poster and I said, “That’s so stupid. I can’t believe she put all that energy into that. And how old are her kids? How many does she have? Just ridiculous” … and then I saw it online and read her blog post about why she made it here.

She wanted to find something that would actually involve her children in conference instead of merely distracting them and I latched onto that thought and then ran with it … until 1:30 am on Friday night. Admittedly, this was a major undertaking, but hopefully I will use it over and over again. Along with the conference center board, I made treat buckets. There were a lot of ideas online to do this, so I don’t know who to credit the idea to, but it’s great. My boys are old enough to know how to listen for words and take treats. I would not recommend this for children 3 and under. They’d just steal the treats or be really mad that they couldn’t just eat buckets of treats for a few hours. I tried to pick a few healthier treats than just jellybeans and M&M’s. I picked: fishies, popcorn, chocolate covered raisins, all natural fruit snacks, some mini cookies (I caved here) and animal crackers.

Here’s the best part – it worked. Like a charm. seriously. My Noah was especially interested in the conference board, even moving the clock hands every 10 minutes to mimic the actual clock in our front room. He kept up with putting topics in our speech bubble and changed every speaker at the podium. He and Liam also LOVED the snacks. Liam mostly just watched when Noah would hear a word and grab a treat from the bucket then follow suit, but hey, it worked. They were quiet, interested and good! And after the Saturday sessions, Noah said, “I wish we had more conference”. I told him we had another whole day and he did a little fist pump in the air and said, “yes!” How cool is it that my boys like conference??!!!

Anyway, it’s almost time for the last session to start, so I’m going to post the pictures and eat something. 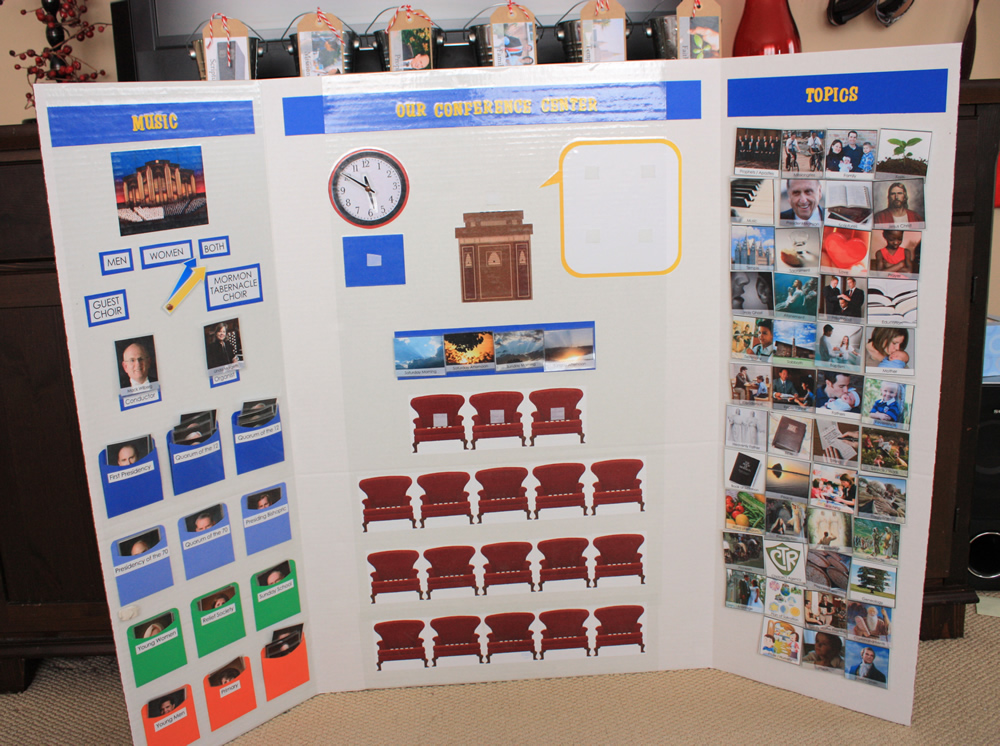 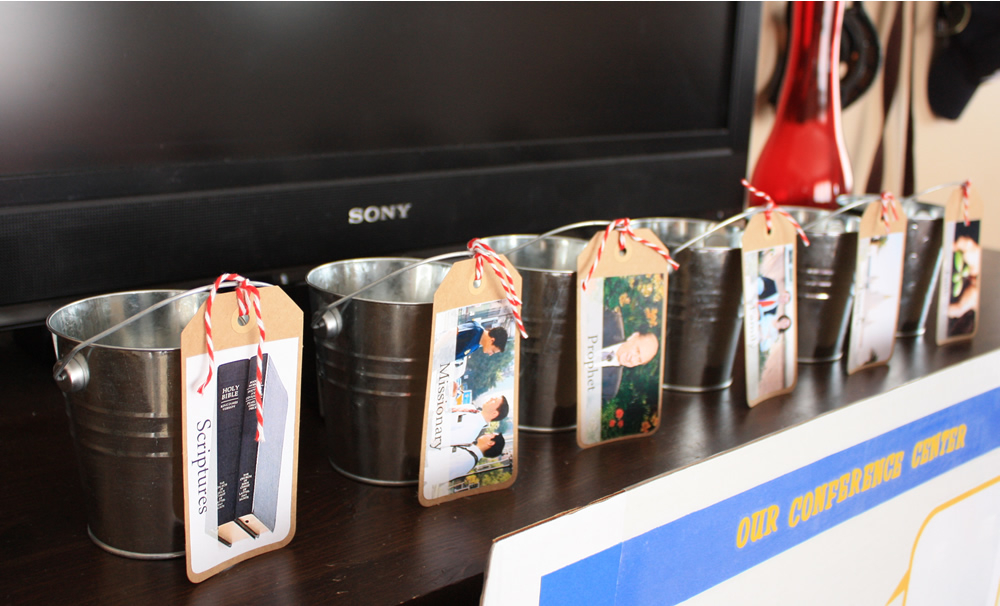 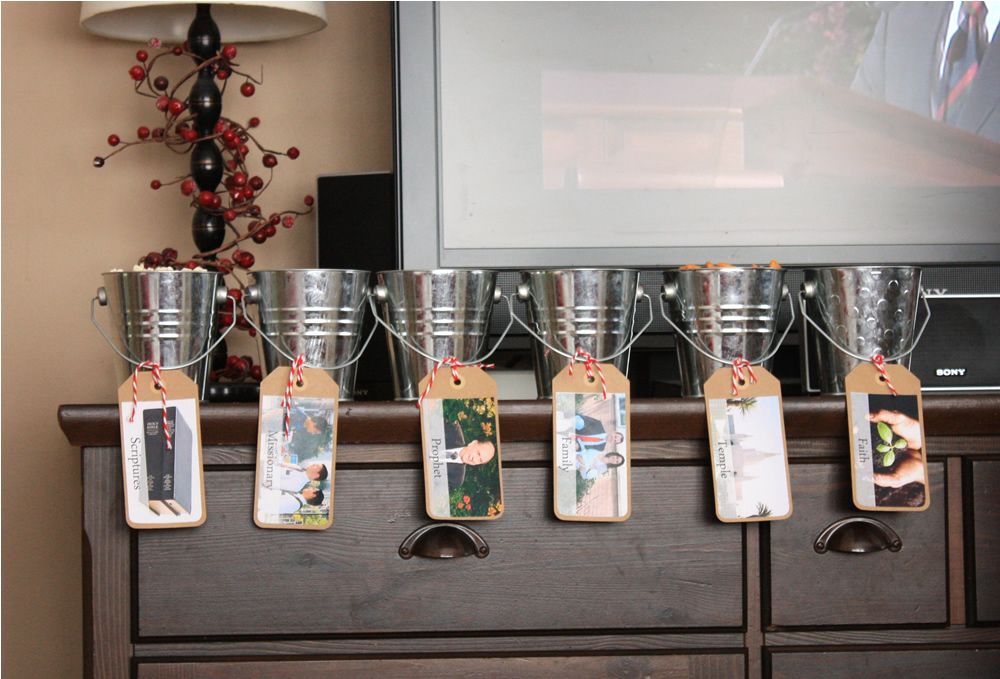 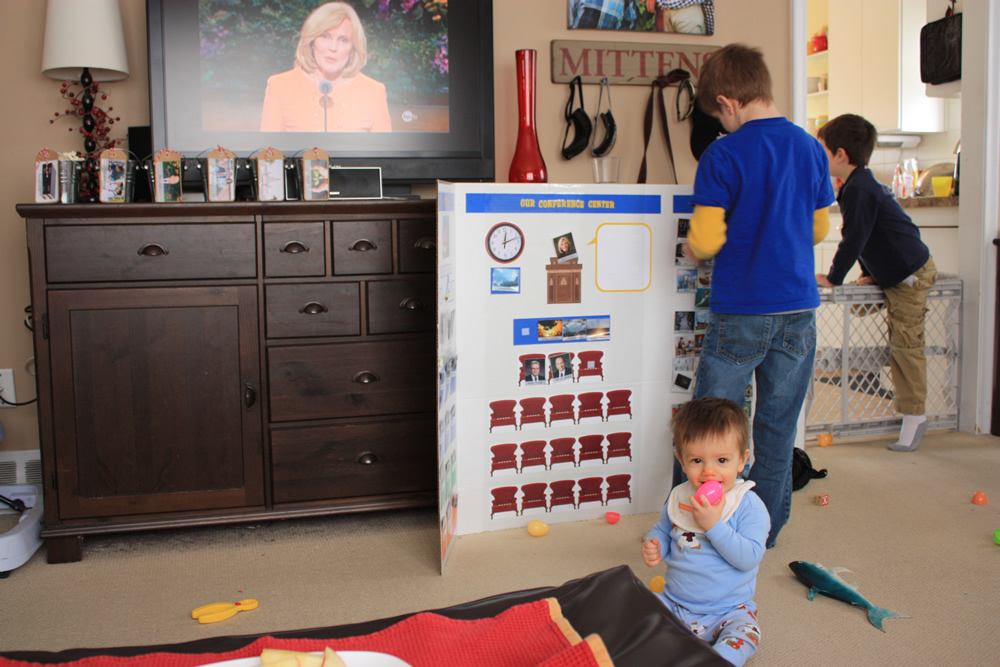 The board in action …. funny that Ray is the only one cheesing for the camera. 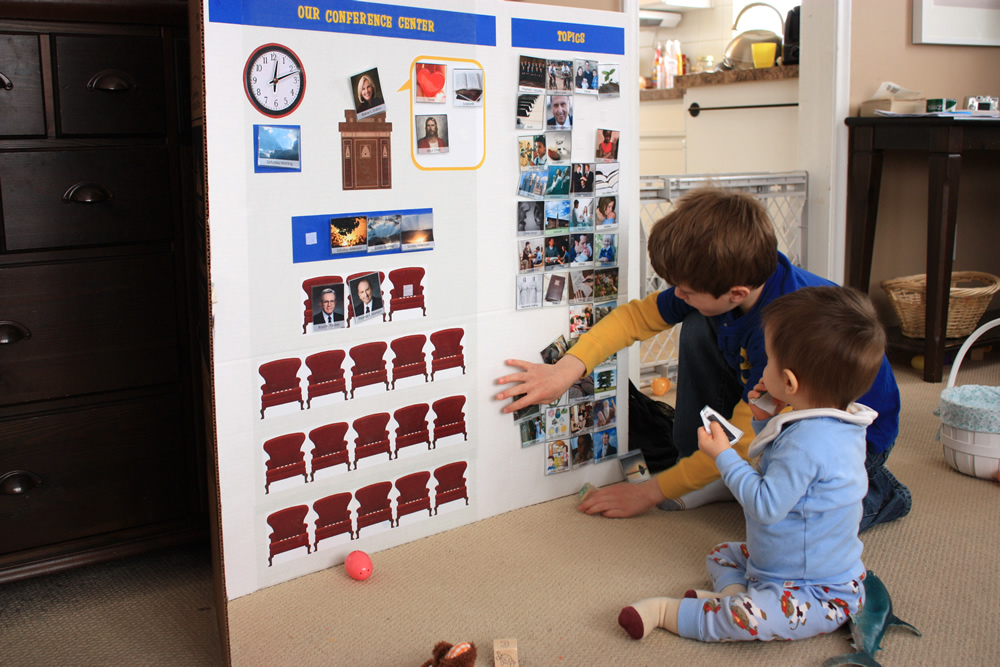 Ray really loved the board and thought it was pretty tasty too! 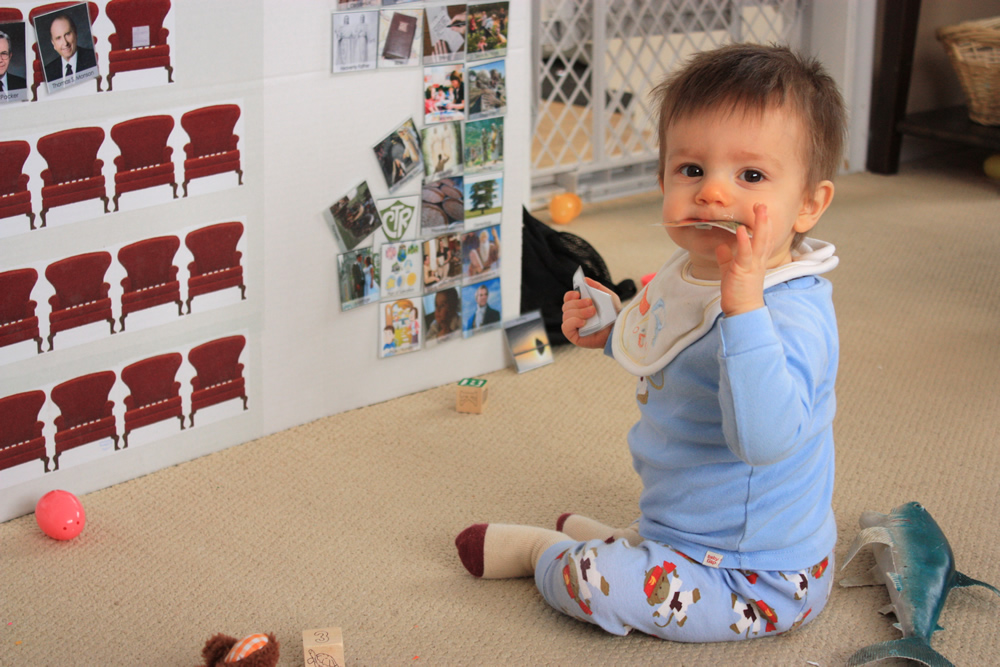 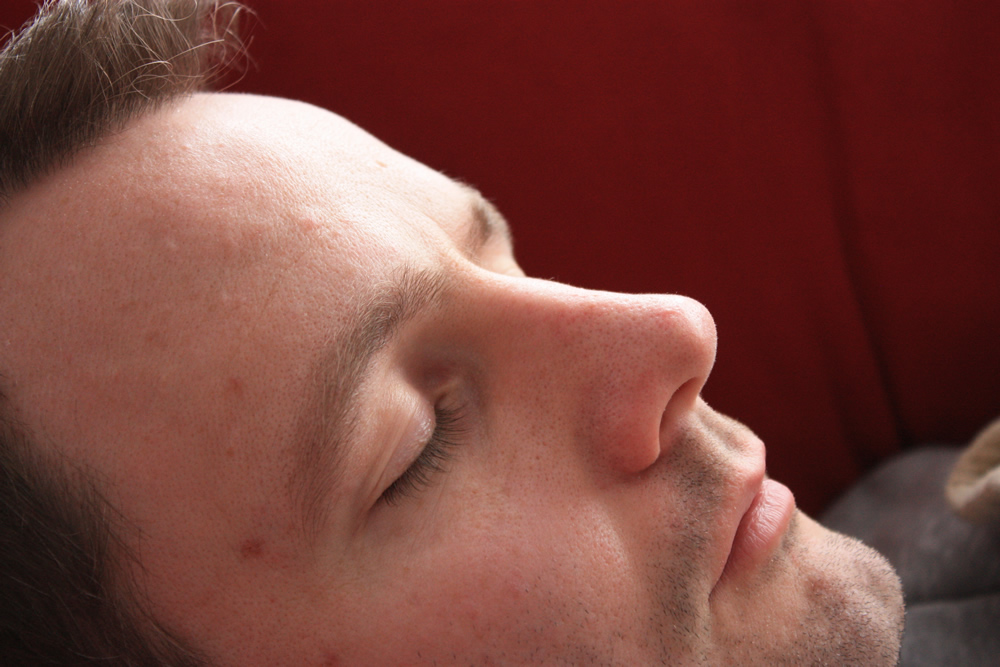 This makes it look like Daniel slept through conference … he did not. He got up early this morning and took care of the boys while I slept in ’til 9:45 am. I just had to get a shot of his beautiful and serene face. He looks so handsome when he sleeps. 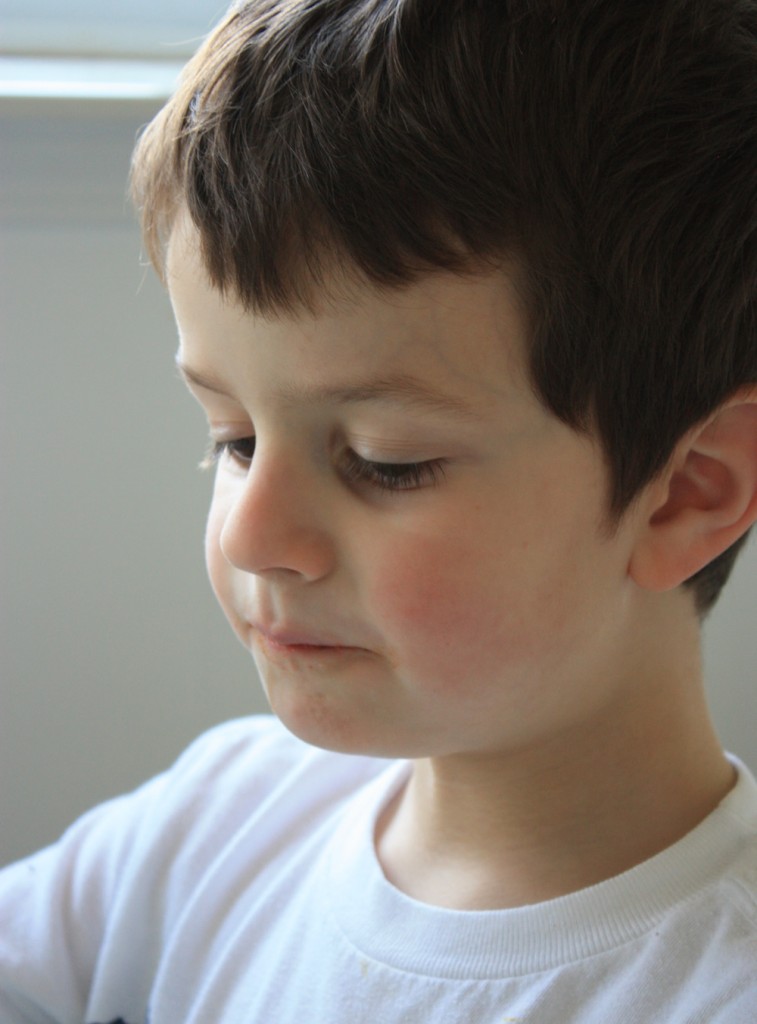 I made some snacky type foods for in between sessions and the boys loved that. They loaded up their own plates with whatever they wanted! I had put out the food on platters because we were having friends over for the second session and Noah kept saying, “Mommy, this looks sooooo nice! You put everything in lines and it looks so pretty!” …. ahhh, kid after my own OCD heart 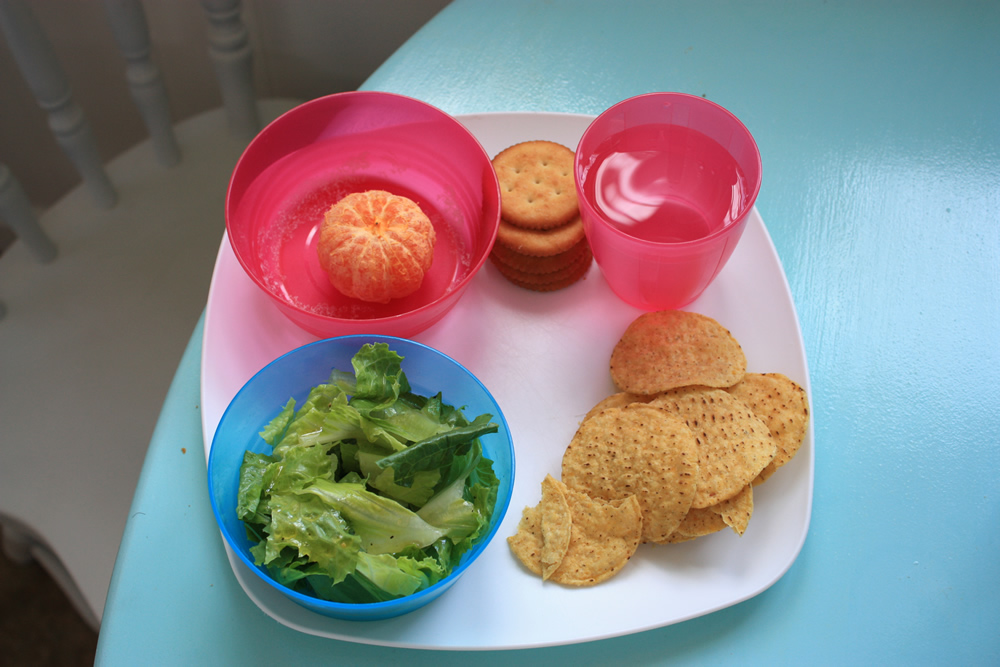 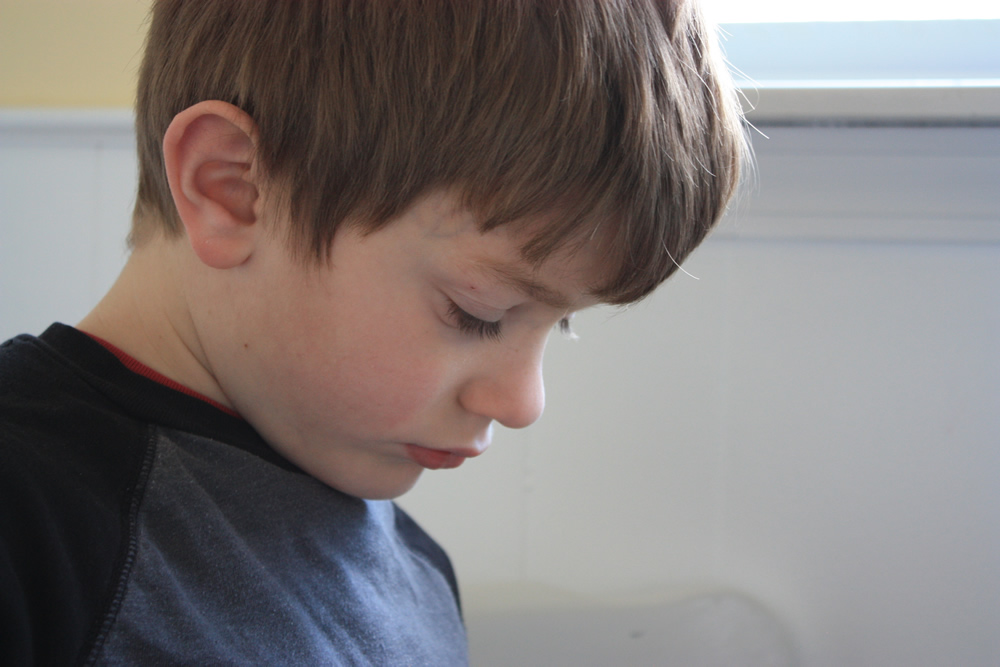 Concentrating on peeling an orange. I love my boys. All so gorgeous. Happy conference weekend!