This is Chiara, day two: 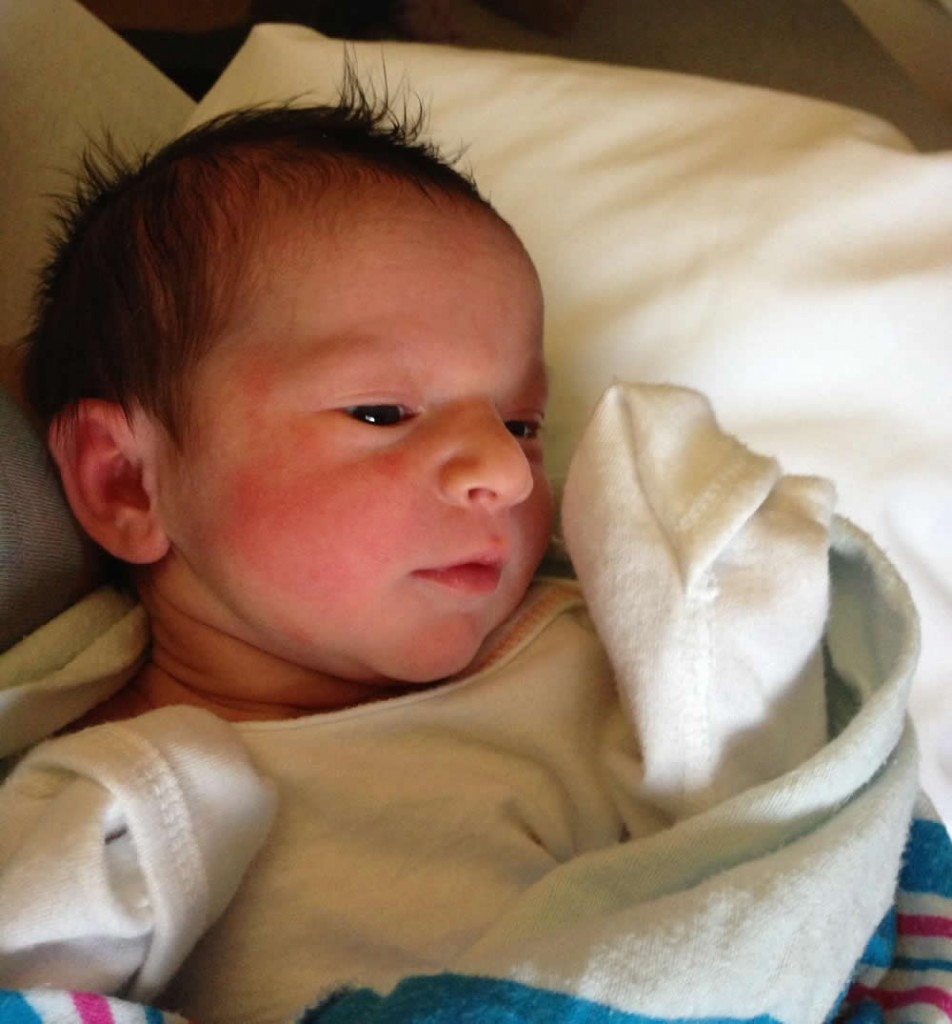 I woke up this morning wishing I didn’t have to. As the morning progressed and I had to convince kids to shower, make Noah’s lunch, make breakfast, cheer up Liam even though I felt like crap, change a poopy diaper and go out in the cold to start the car so it would be warm for my boys, I was writing a blog entry in my head.

I couldn’t wait to get home and write it all out. All the sad, hateful, angry thoughts of injustice of being a mommy. I had been thinking of it all since last night, really. When Daniel and I watched the 18 minute video capturing the essence of his Brothers Gone Wild trip he took last August for a week alone with his brothers. I thought about how unfair it was that I never get time away. Just me. No kids. Just calm. I got to do that with Daniel in Cancun last year, but so had he. And I had done it 8 months pregnant and nearly passed out in my compression garments and jeans, waiting for our flight to leave humid Cancun. I had the same vacation he had, but with humiliating stretch marks and massive thighs, waddling around a swanky hotel as a human balloon, watching all these bikini-clad, tan ladies with beautiful thin bodies. Oh man, I was gonna make Daniel understand what it’s like to be a mommy.

I was gonna write it all out. I was gonna do it in terms he would understand – I was planning on writing a job description of a mommy and ask him, with a smug smile on my face, “Would YOU take a job like this? huh?” And I would know the answer and look for empathy and love and appreciation from him. Instead, I know I would get a tired response, “no, honey, you have it rough. It sucks to be you. I’m sorry”. I was gonna, but then I didn’t.

My friend Christine has this way of finding specifically poignant stories and talks about motherhood and then sending me the link. Gah! I saw the link to a story she sent me yesterday and I thought I wanted to write my sob story of the drudgery it is to be a mother and NOT read her link. Then I read it. And teared up. And felt stupid. And thought – I have it all mixed up.

It’s true that Daniel will never experience labor and delivery, but he will never know love like I experience it either. He will not know the connection a mother has to her baby. The feelings of carrying that little human – growing him in your tummy. The miracle of birth. The overwhelming feelings of power and gratitude of birth; not knowing you could endure and carry out such a thing and then watch that tiny human grow before your eyes. He will not know what it is. He will watch it and feel a sense of it, but not live it. I will. I do.

This is the article that darn Christine sent me: These Are the Lines of a Story

It’s a beautiful remembrance of what I should see in my everyday life as a mother. So there. I didn’t write the job description like I kind of wanted to (it would’ve been awful … truly awful). But I wrote something else instead.

This one kind of goes out to my youngest sister, Aria, who just had her third baby, her first sweet baby girl, Chiara, yesterday. Aria did it. It’s a total miracle that we do what we do, Chick and you did it.

Ray laughing … again. This kid is a pretty happy baby. You have to watch it to the end, because something happens. 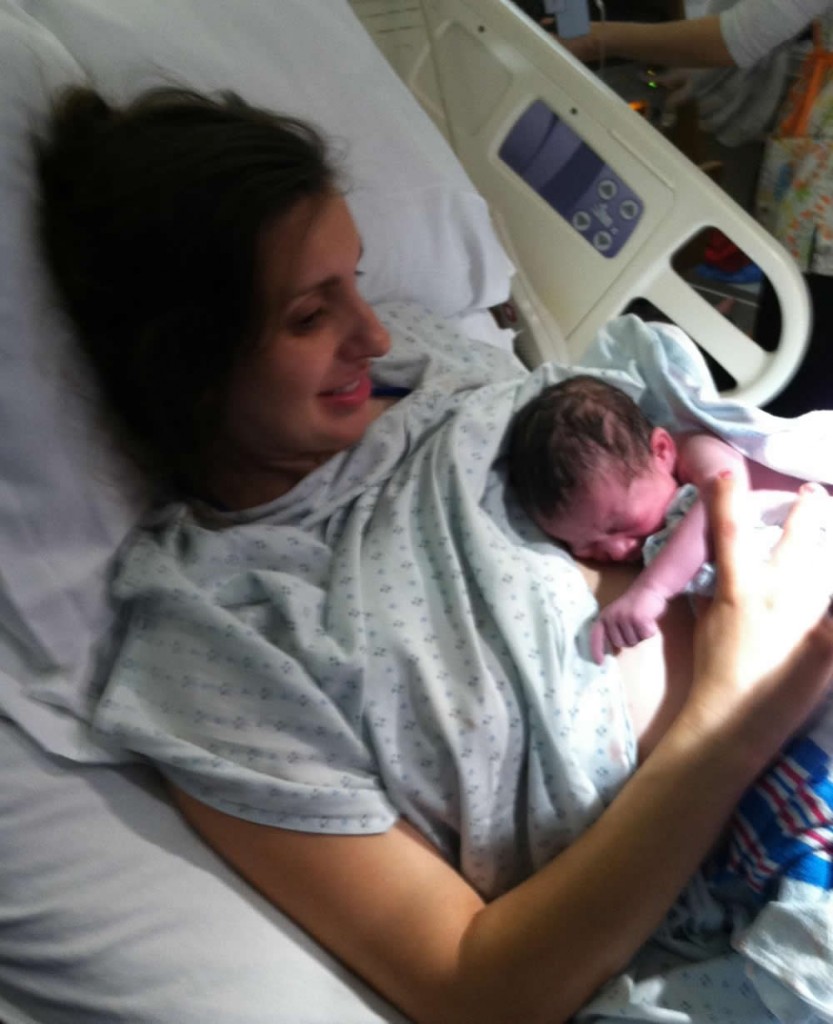 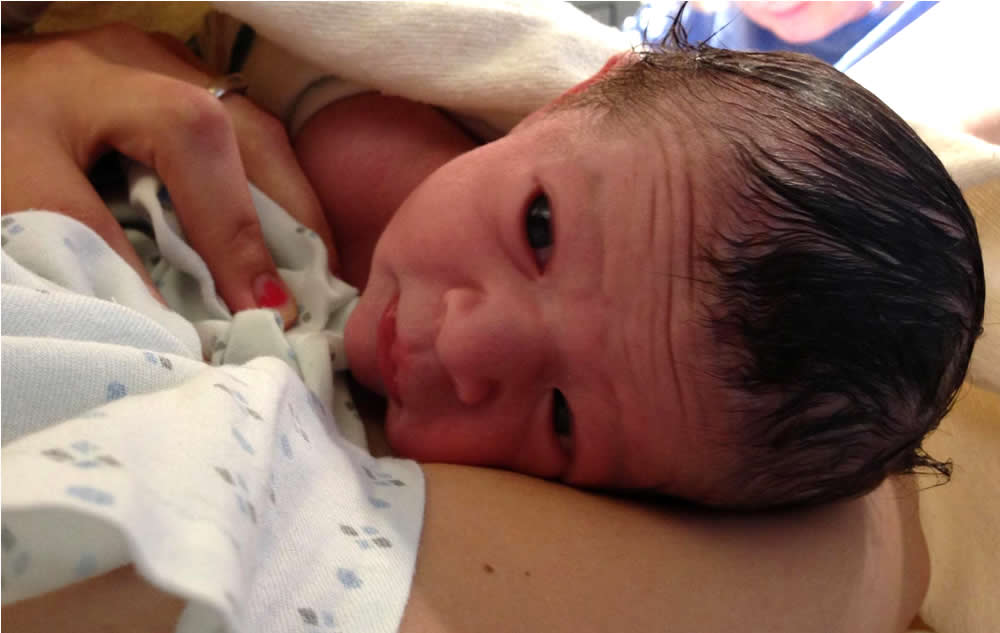 So glad this baby girl is finally here! She was 13 days overdue. Poor Aria.

In preparation for Chiara, I have been doing a lot of projects that I forgot to post pictures of. I finally finished all the little presents for Chiara just in time to send them in the mail, so I only snapped a couple pictures with my phone. But here are the gifts for Chiara: 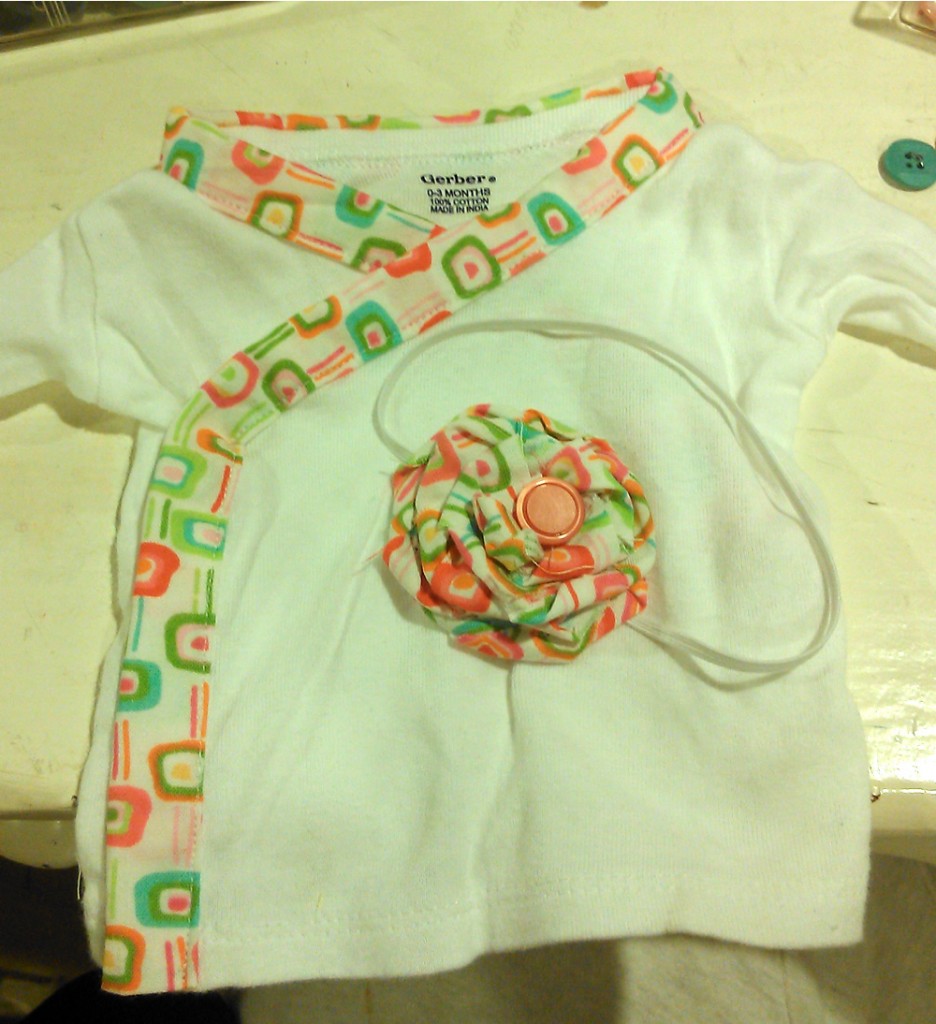 I did several of these. Matching baby onesies and hair things. 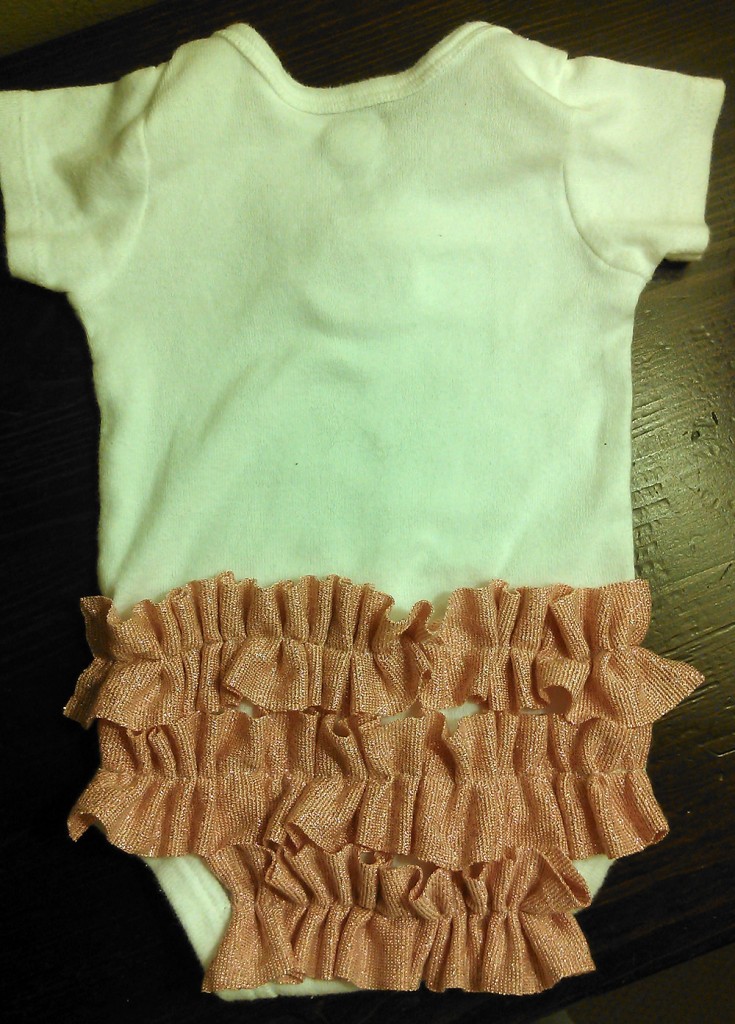 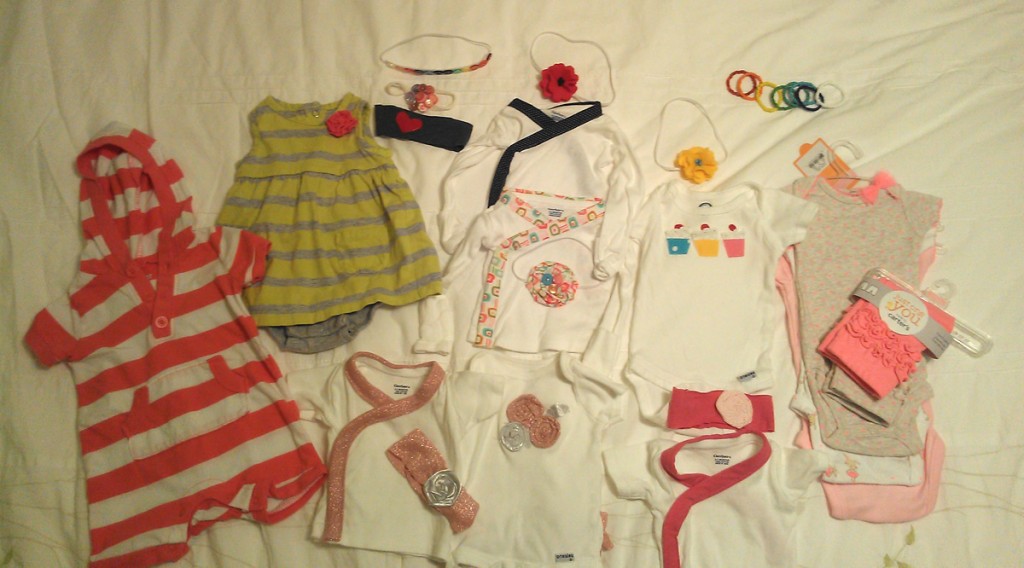 Some things I bought from the consignment store, some I made and the stuff on the right I got from Target. I made baby bracelets in every color of the rainbow and scads of headbands, so I HAD to make something for them to hang on … 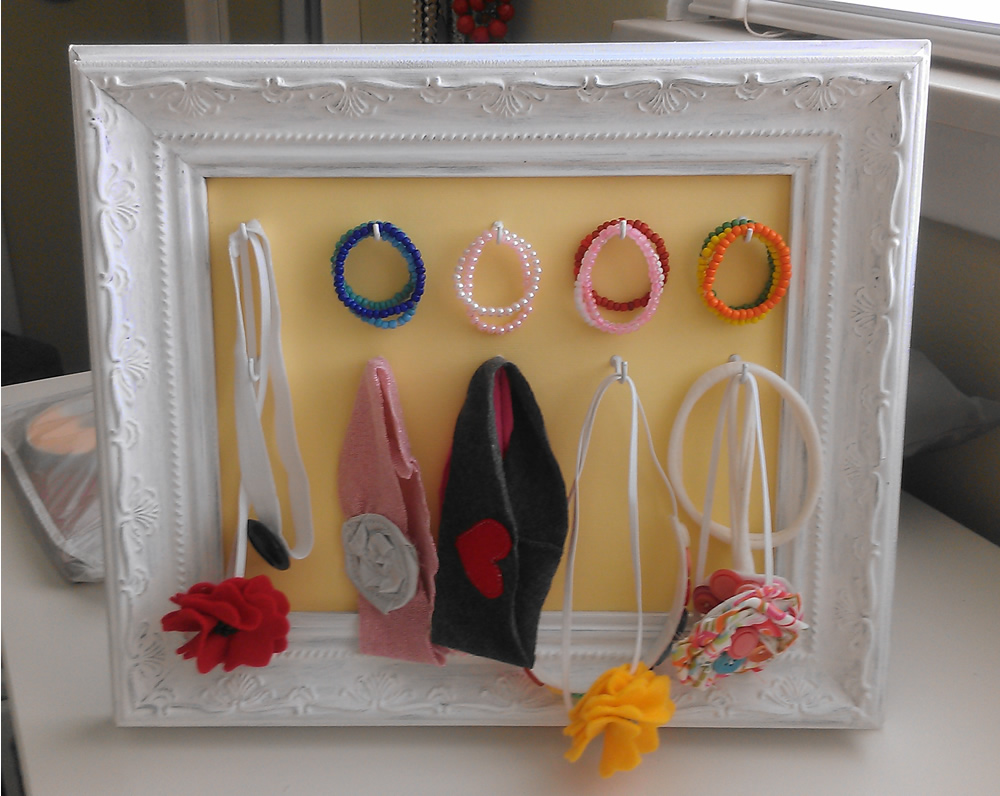 I got the frame from TJ Maxx and painted/distressed it white. Then I got some hardboard from what used to be the bottom of an IKEA drawer and cut it to size and put yellow scrapbook paper over it and added hooks and viola! A jewelry/headband holder.

Luca’s gift: a “treasure bag”, full of treasure of course. (Luca is seriously into pirates and mostly treasures). 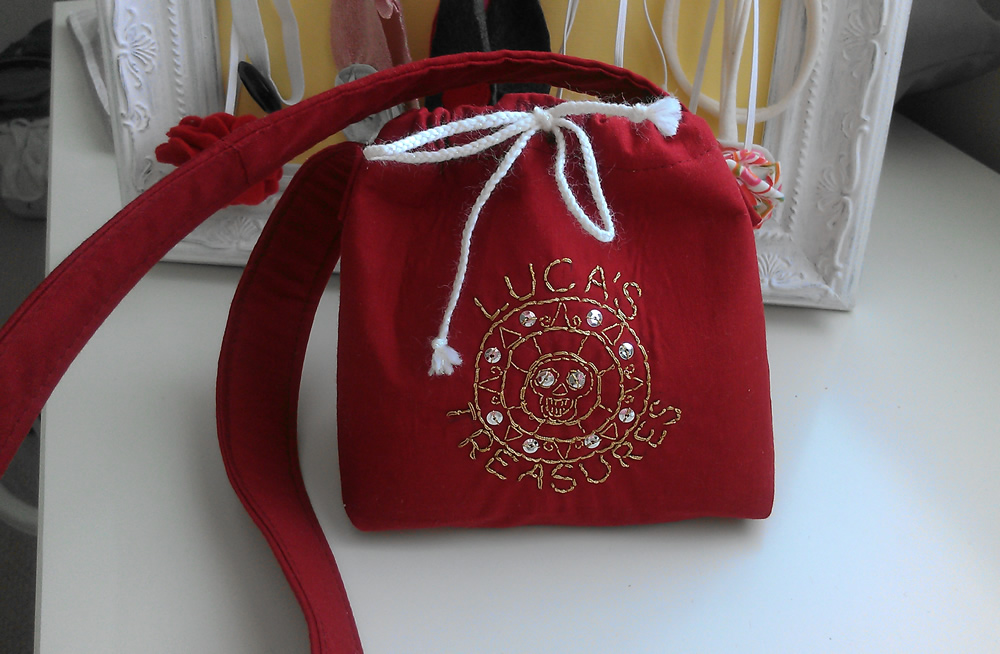 The design is a gold coin from Pirates of the Caribbean. 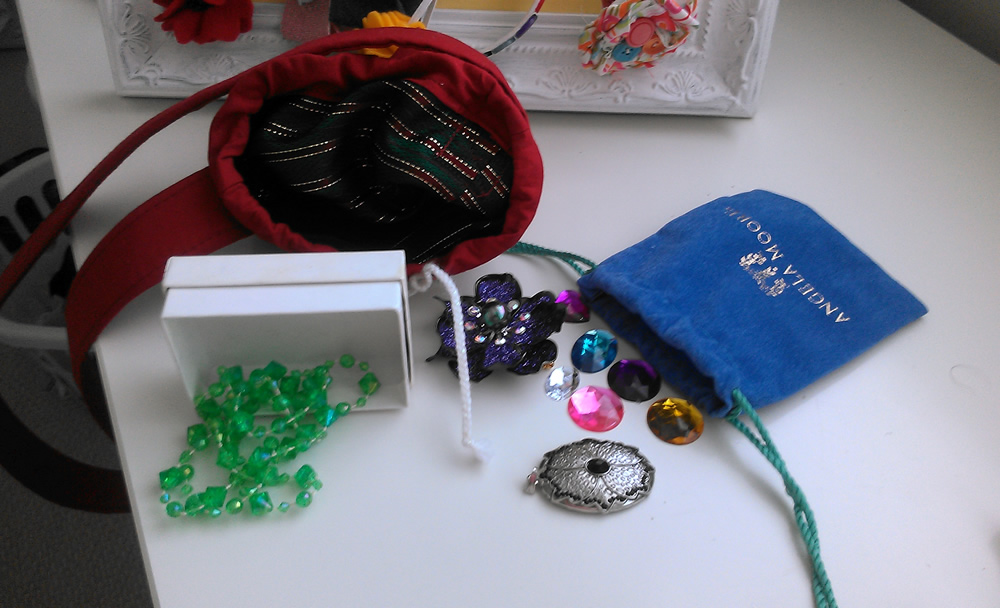 These are all pictures from my phone, so kinda fuzzy and some are blurry …

And for Enzo: a stuffed super hero monkey. With a cape. I also made a life sized matching cape for Enzo to wear (which I hear has been commandeered by Luca): 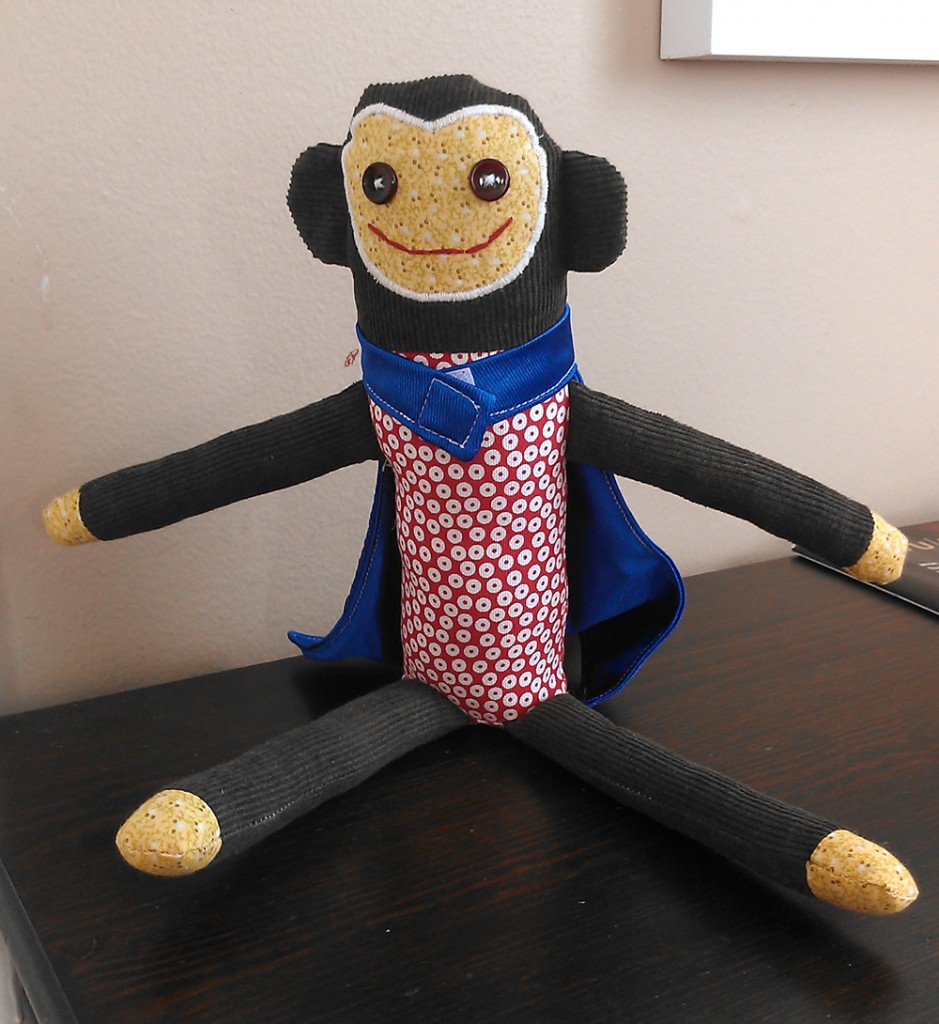 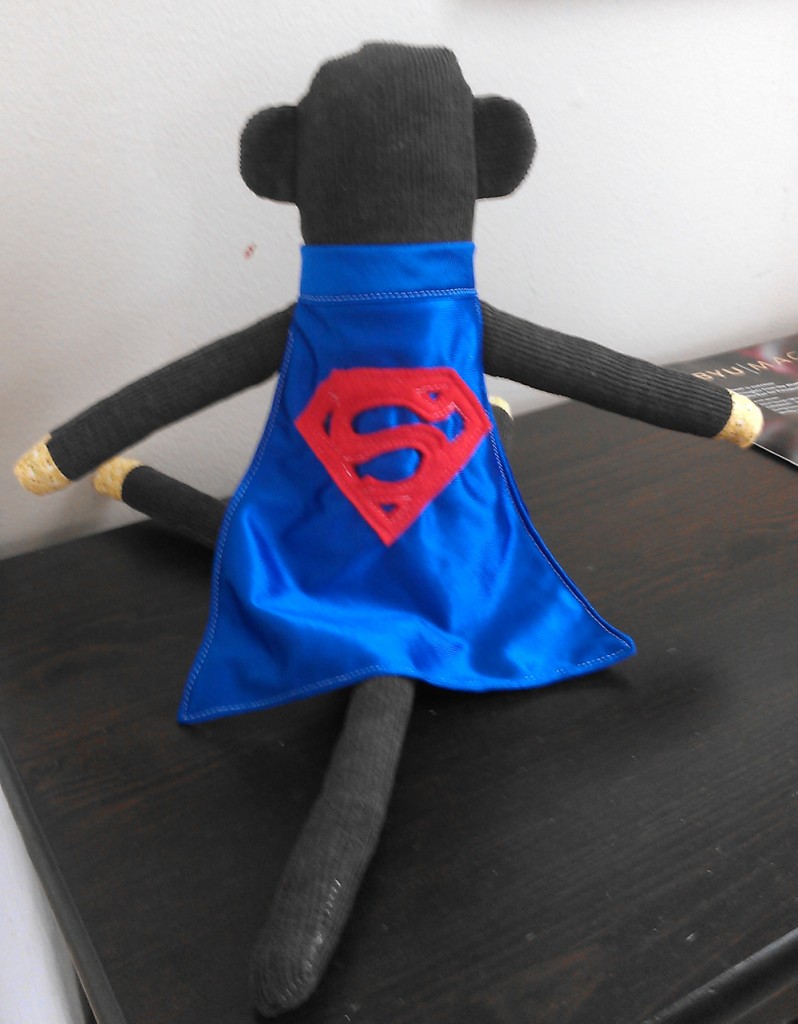 And I had Ray try out a Chiara headband …. ahhhhh, sigh. Ray would be such a pretty little girl …. 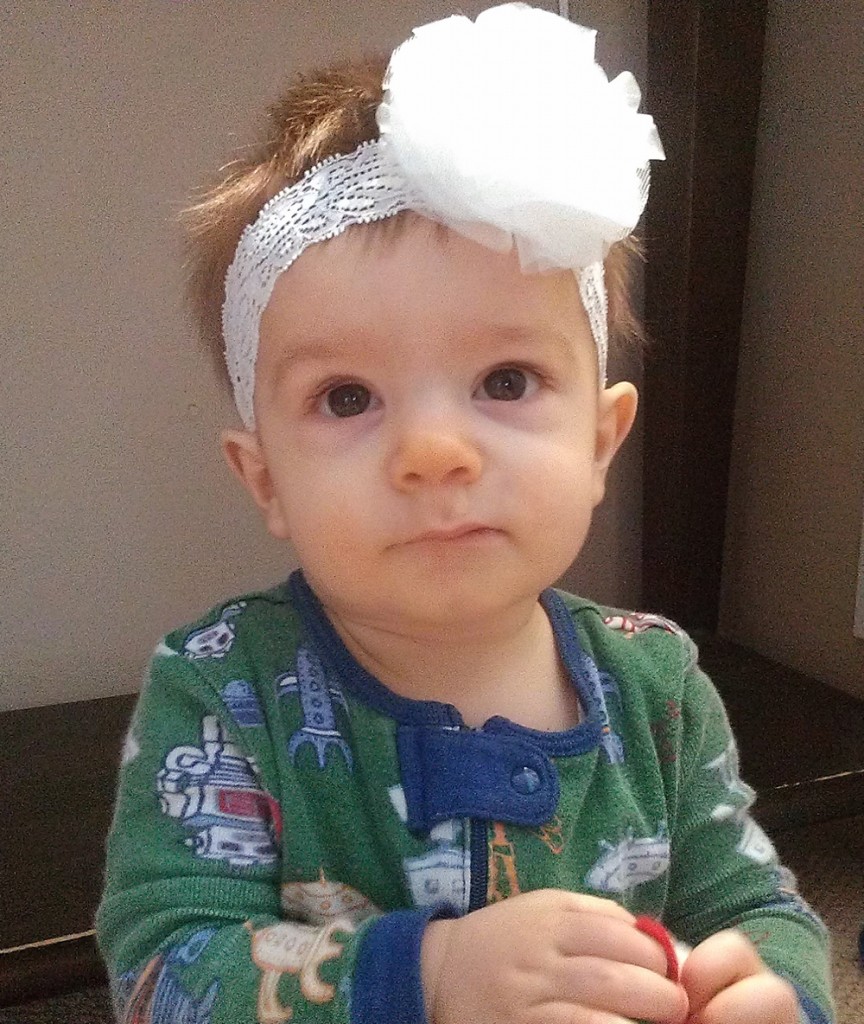 OK, now on to the next project … Aria called me last week and said she wanted me to make something for Enzo’s birthday (which is on Thursday), so I’ve been sewing like a mad woman for days and finally finished it today. It’s a coloring/activity briefcase for Enzo. Here are wayyyyyyy more pictures than you wanted to see of this …. I really feel like this is some of my best work. Not bragging, just saying, this is about as good as it gets for me. I’ve topped out on this one. 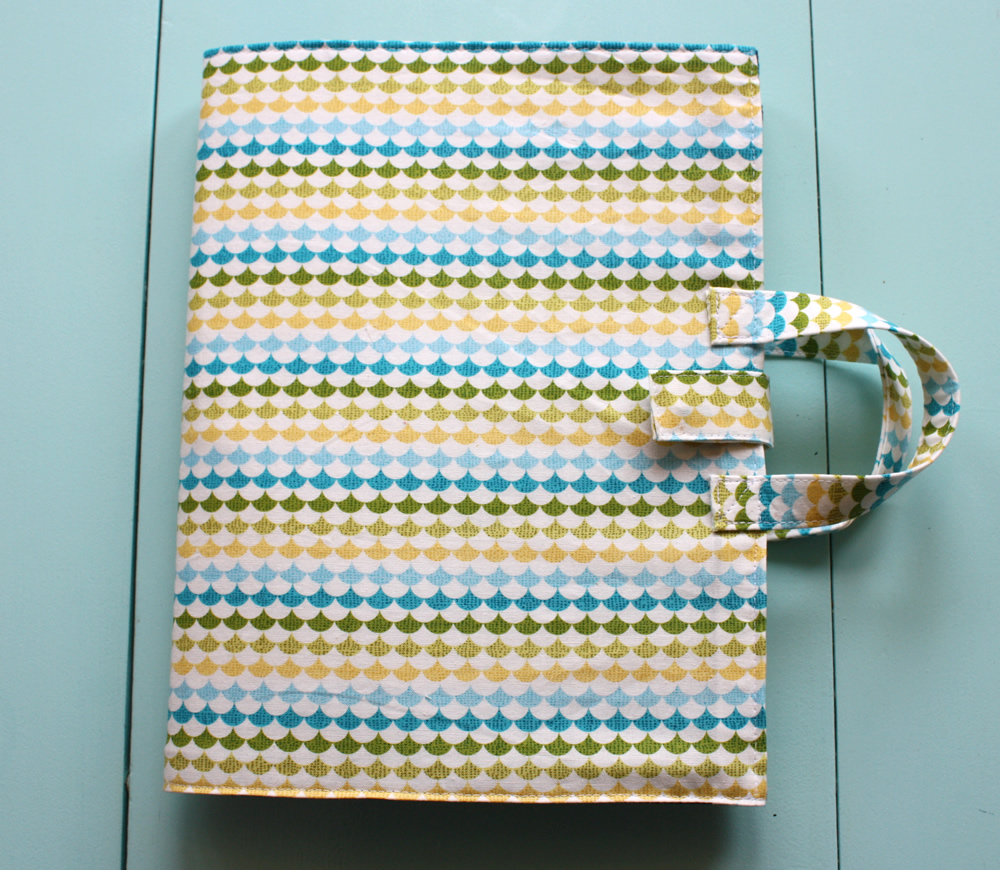 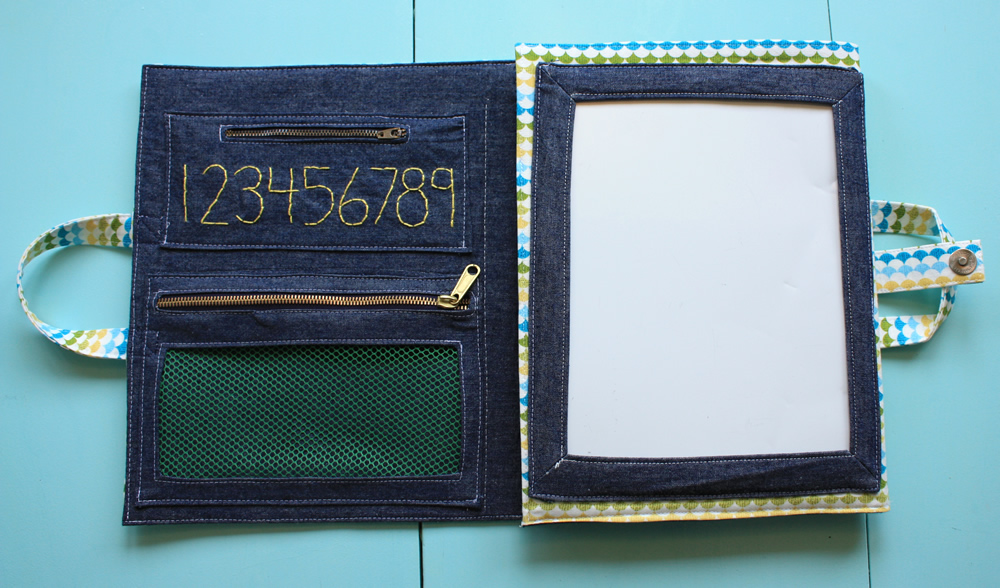 On the right is a magnetic whiteboard. 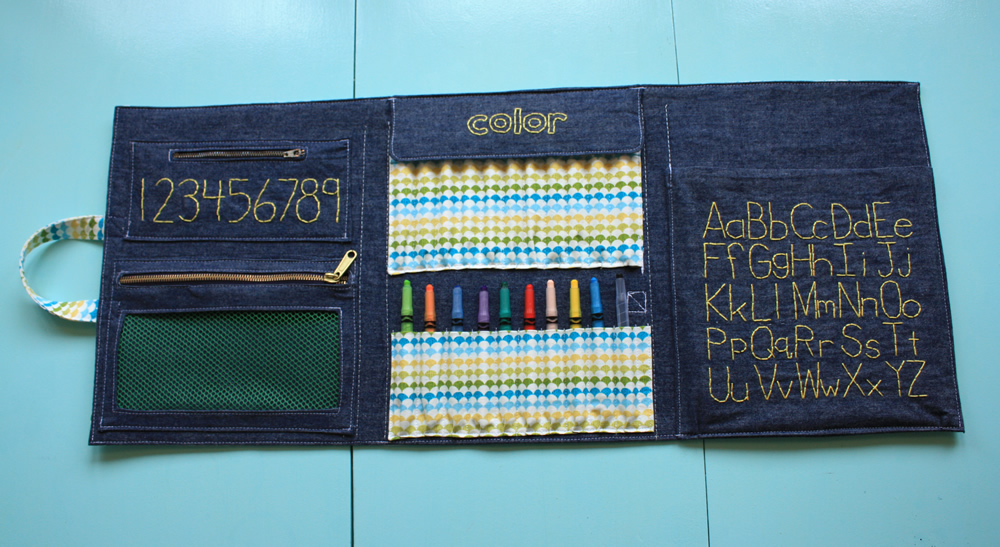 OK, on the right is a large pocket for coloring books with the alphabet hand embroidered on the front. The middle section is for crayons on the bottom and colored pencils in the top section. The left side has two zipper pockets for magnets and treats or whatever. The magnets would be for the magnetic whiteboard I have on the flap. 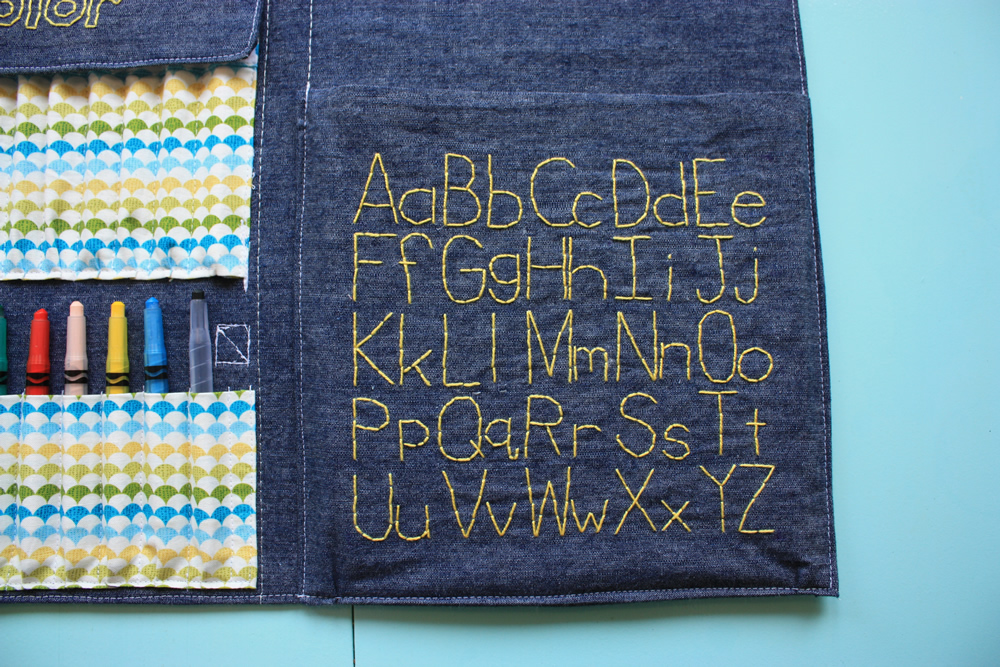 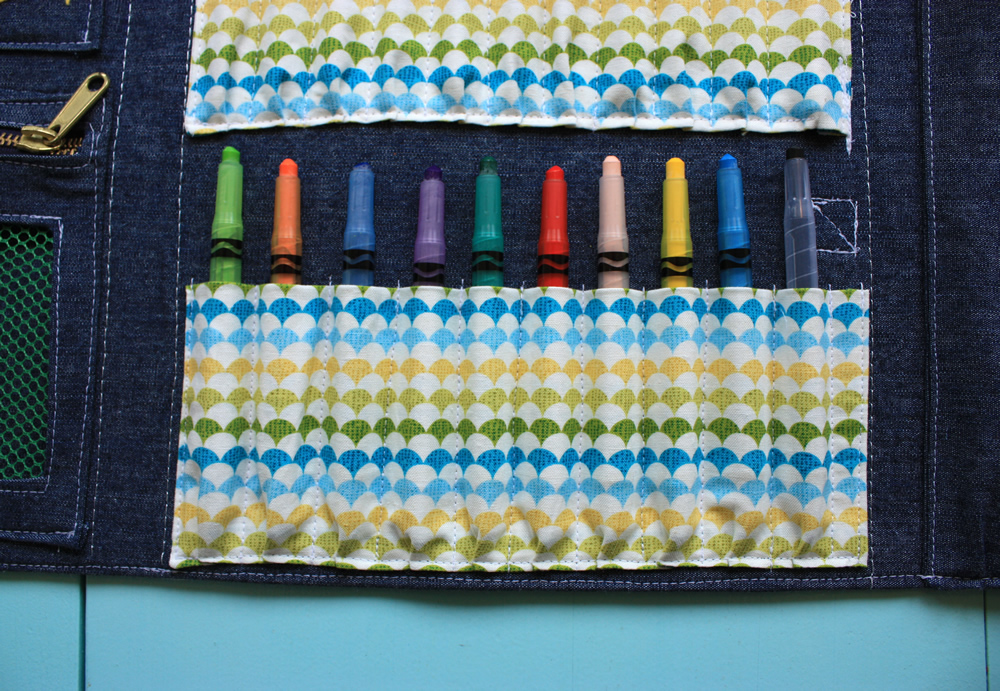 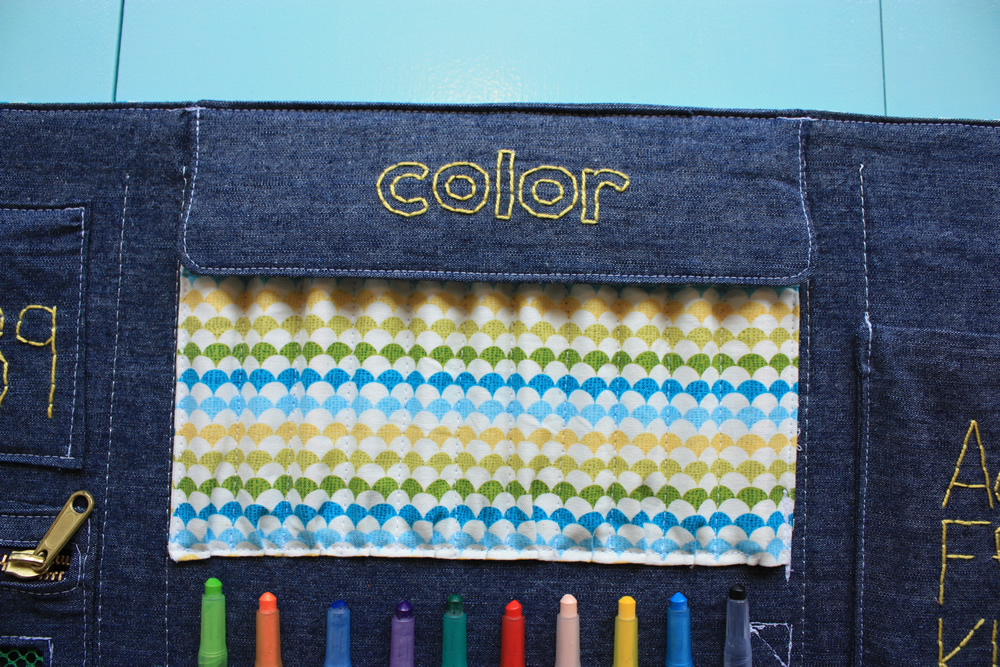 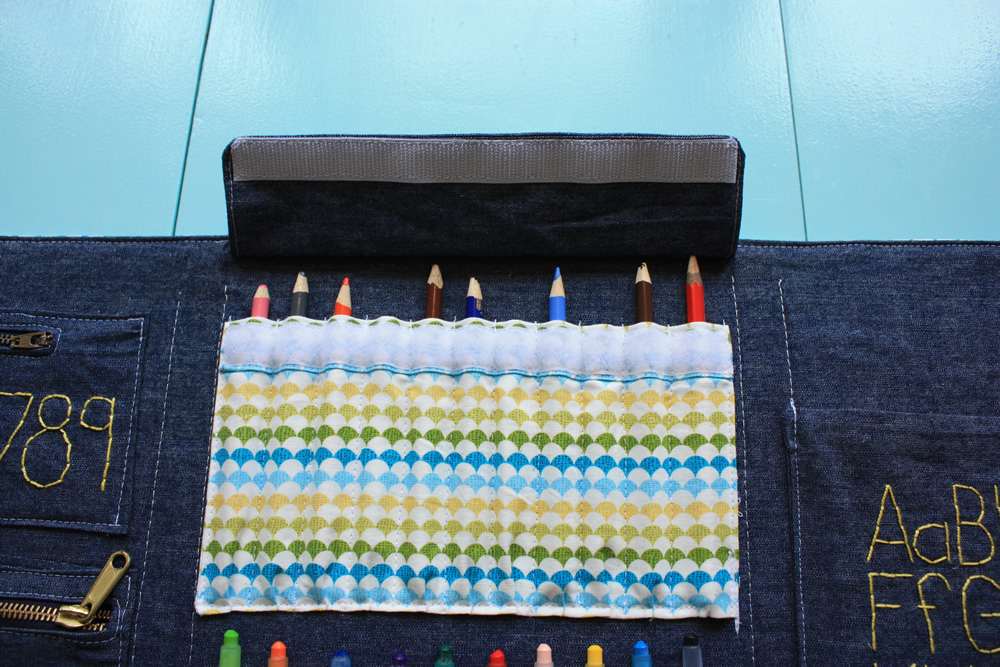 We were afraid that with all the carrying around this briefcase would get, that the colored pencils might slip out, so we made this flap to Velcro close, to keep them in place. 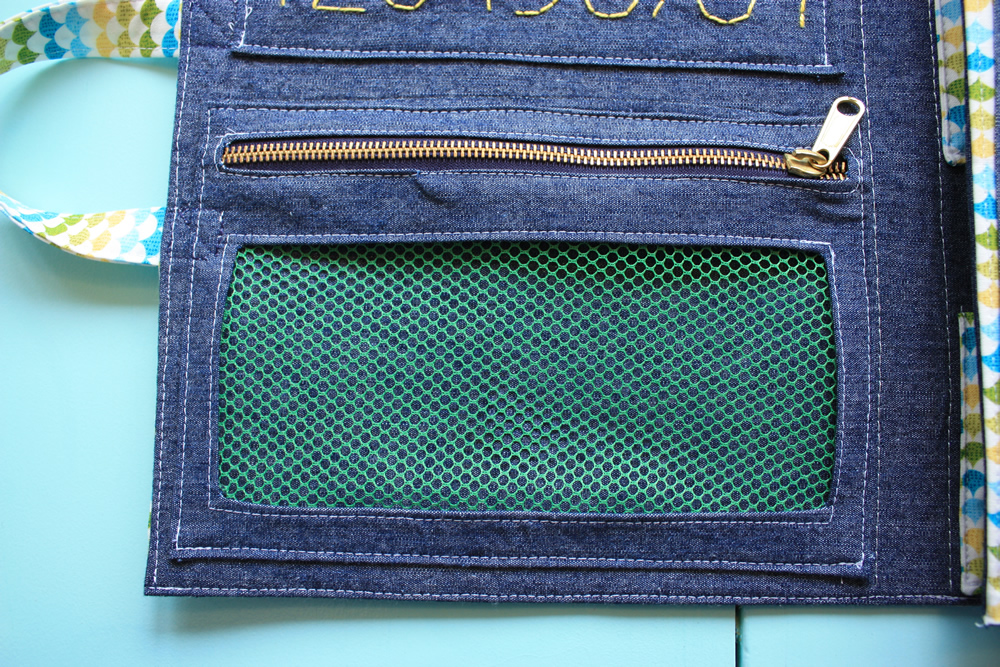 That’s mesh, so Enzo can see what’s being held inside. 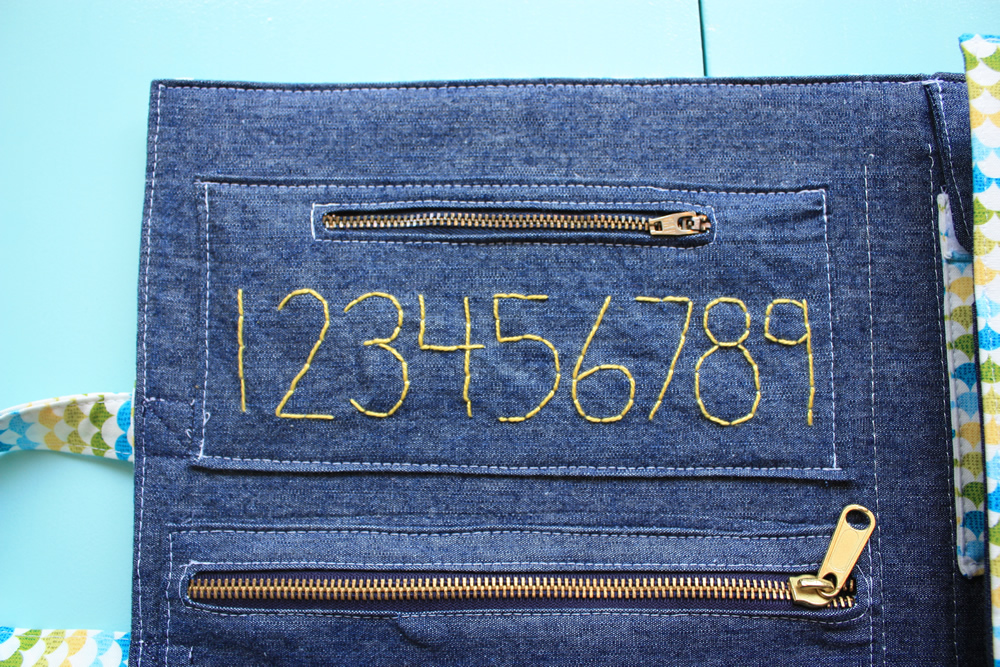 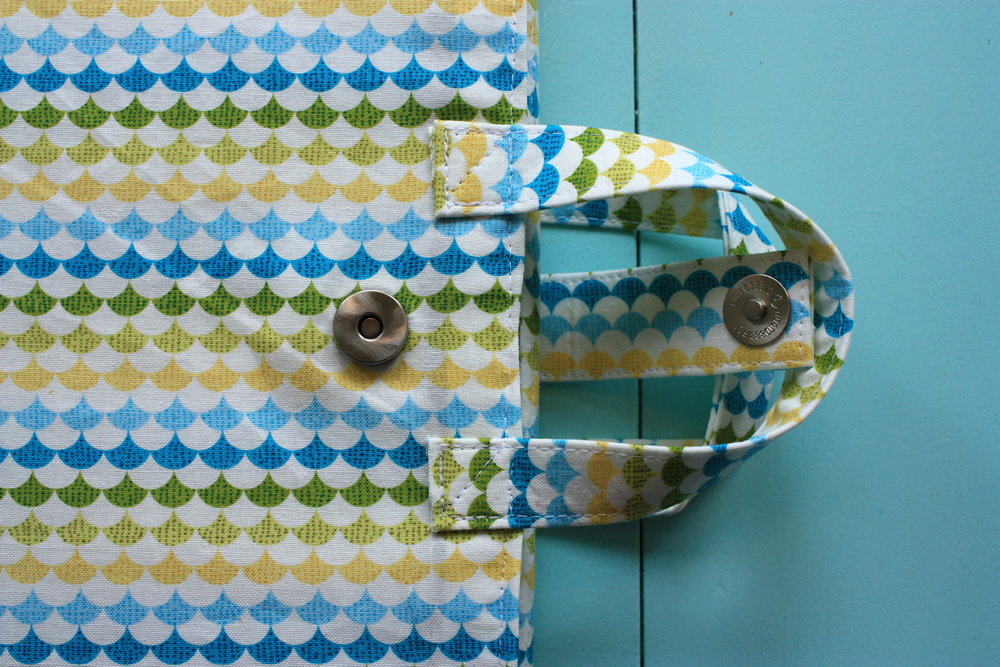 Finished with a magnetic snap closure. Phew! I’m tired just looking at this post. I can’t believe I cranked out all that stuff. Well, welcome little Chiara and happy birthday Enzo!!! 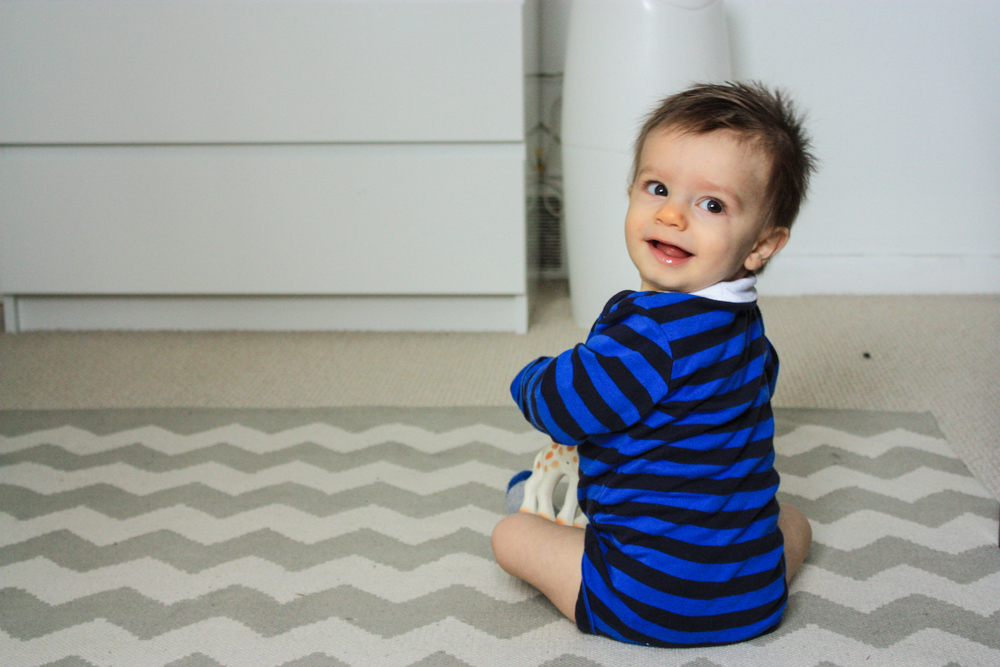 I can’t believe it. Ray is 9 months. It went slow and fast. Here is what he’s up to these days: 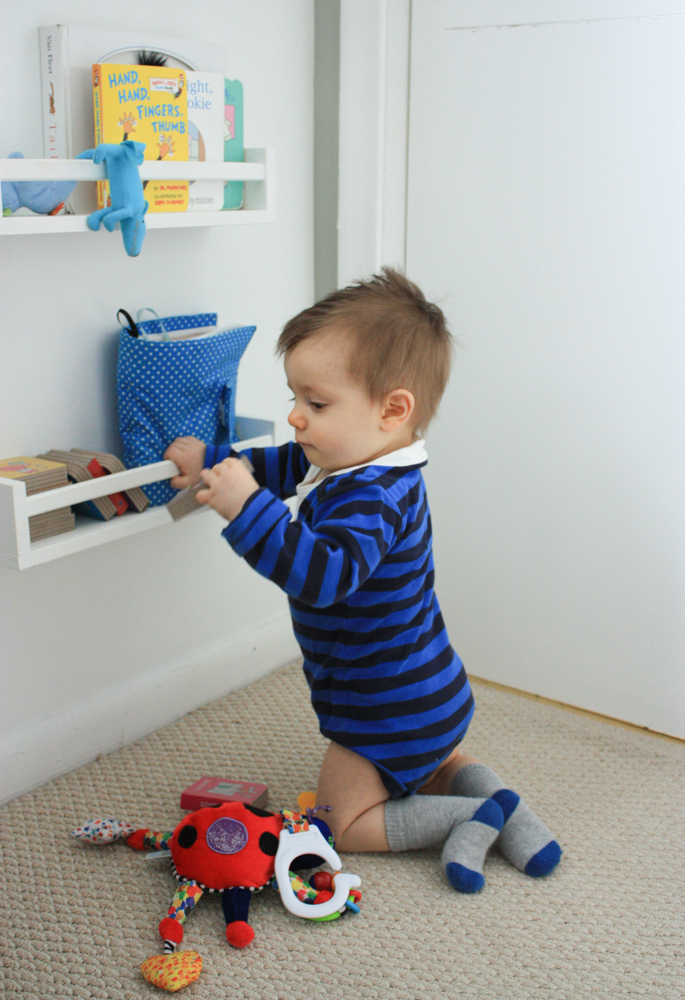 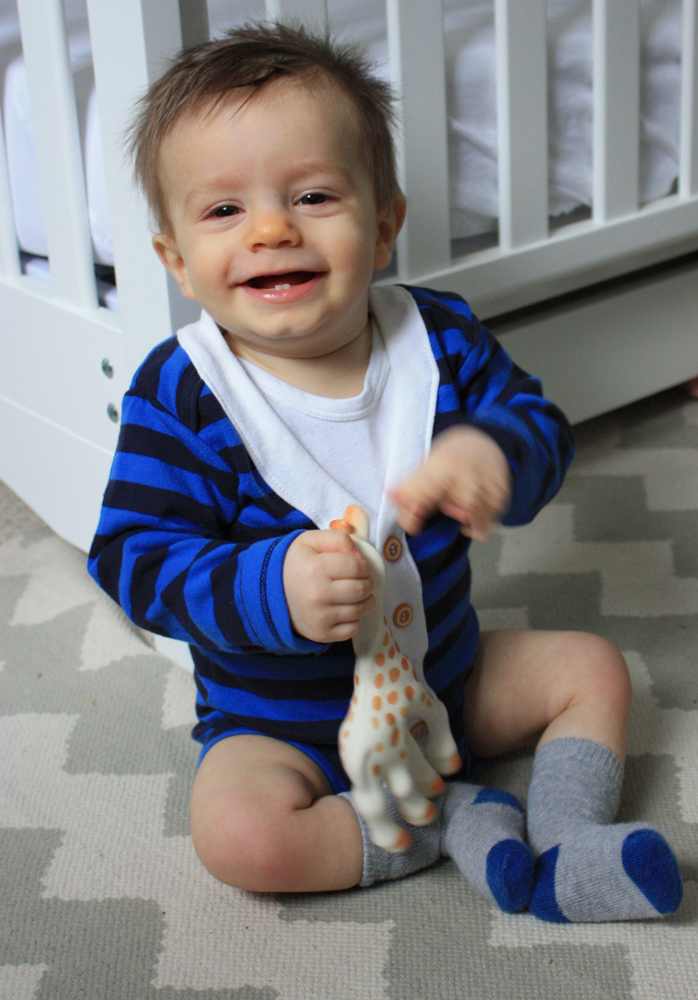 OK, now for the fun stuff: I have been looking on pinterest for ideas on what to dress up Ray like for Easter and I found these onesie cardigans that I LOVE and so …. I had to figure out how to make them. I found this tutorial for them and made little Ray his first onesie cardigan. I think I pretty much, nailed it! But I made it from a onesie I got from the consignment store for $1 and had to pick from what was there, so it’s a little big on him, but I think it still works. 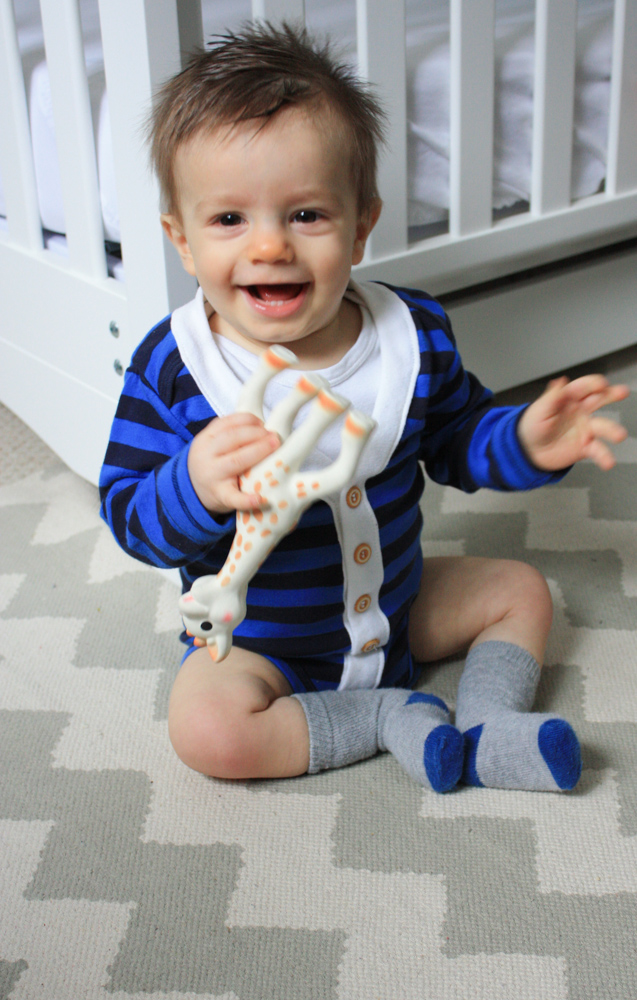 So, once I finished the cardigan, I gave Ray a bath and then did a mini photo shoot in his room to show off his beautiful self and my handy work on the cardigan. You’ll notice he has an orange nose. He’s been like that all winter. I think it’s just because his nose is chapped and dry from having a perpetual runny nose for months. Winter sucks. Anyway, it’s not the coloring in the picture that’s weird, it’s really that his nose is orange. 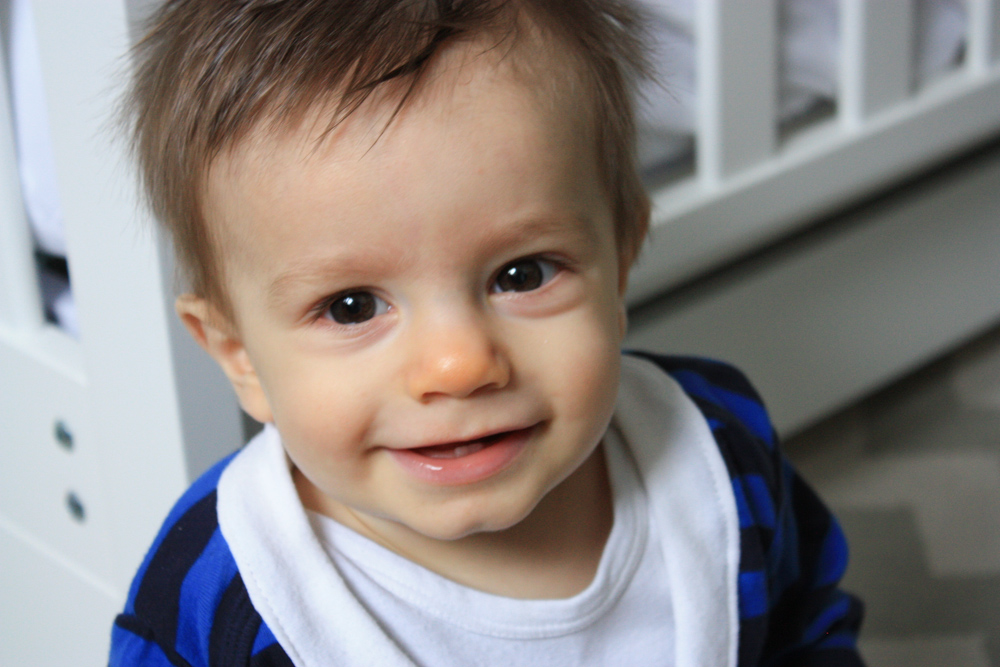 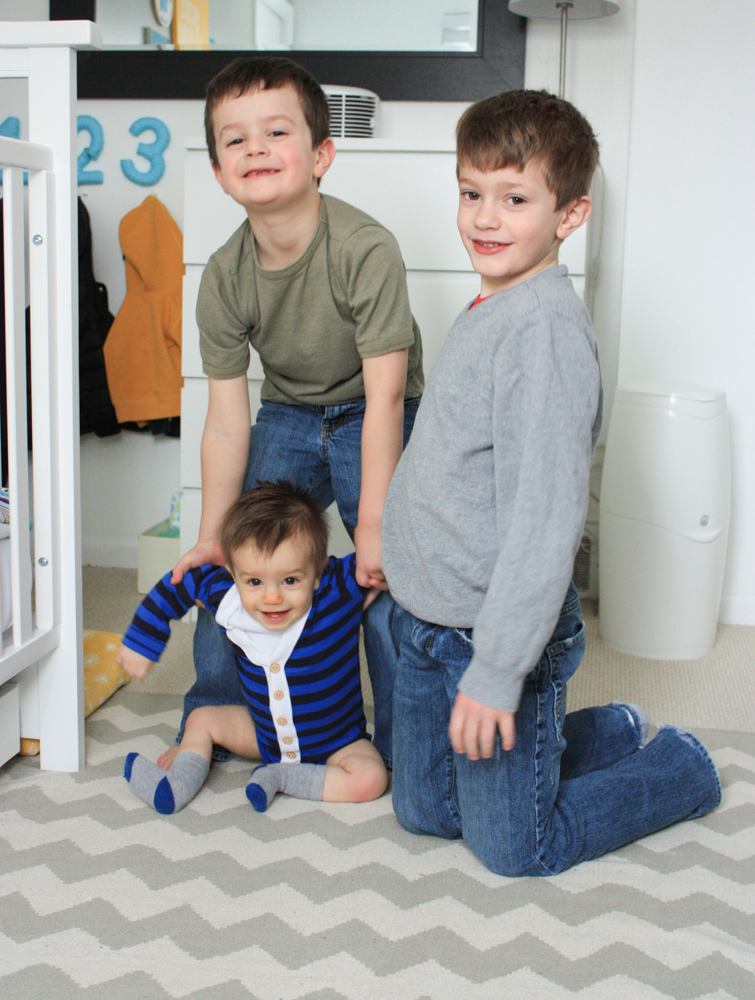 All my boys. They are so fun. I love their sweet faces.

I was feeding Ray and just did something with my cheeks that made him crack up. I ripped out my phone and caught his hysterical laughter on video: